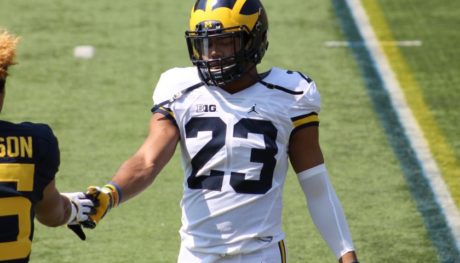 Kinnel was a solid player in 2016, but he was behind seniors Dymonte Thomas and Delano Hill. He was valued as a key backup and special teamer, but unless an injury or two took place, he was not expected to be a huge contributor. He fared well throughout the season whenever called upon, and he made a very impressive tackle for loss against Maryland where it looked like he knew the play before the snap. In many years, Michigan’s starting safeties have looked comparable to or worse than Kinnel; yet he was #3 or #4 in 2016, depending on how you view Jabrill Peppers.

This year he’s the grizzled veteran in the safety group, and he has to start. In fact, he could have spent all off-season eating buffet dinners and lying on his couch, and he would still be the starter at free safety. Michigan lacks skill and depth at the safety positions. Sophomore Joshua Metellus, redshirt sophomore walk-on Jordan Glasgow (who just earned a scholarship, actually), and freshman J’Marick Woods are all on the two-deep at safety, and they’re all extremely inexperienced. It’s key for Kinnel to stay healthy and direct the back end of the defense, because things might get rather tense if he’s not out there in crunch time. He’s a smart, solid tackler with decent speed, and I’m not sure we can say that about those other guys yet.