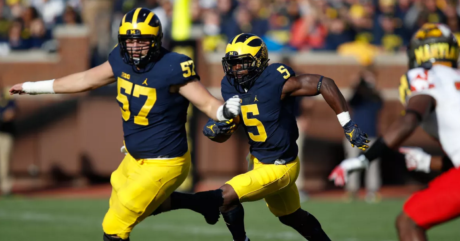 Kugler came in with a lot of promise as a highly rated player and All-American. He was also the son of an NFL offensive line coach, who is now an FBS head coach at UTSA. It was thought that he would be ready to play center for Michigan by year two, maybe three. Unfortunately, that hasn’t been the case, and Michigan has had to rejigger its line several times to figure out the center spot, moving both Graham Glasgow and Mason Cole to center at times. Meanwhile, Kugler barely saw the field early in his career, and he started one game at left guard last season before ultimately being outplayed by freshman Ben Bredeson.

This year Kugler has finally appeared to seize the center position that we thought he would grab three years ago. Cole, who started at center in 2016 after playing left tackle the previous two years, is back at left tackle. Freshman Cesar Ruiz is battling at center and left guard, and he would probably be inserted if something were to happen to Kugler. One would think that Kugler would be ready to make the line calls as a fifth year senior, and the hope is that he can avoid mental mistakes while being able to hold up physically. In the spring, Ruiz looked the part physically, but he was a split second slow on recognizing blitzes. I would be very nervous if Michigan entrusted the center spot to a true freshman, even though Ruiz might be one of the best centers to come out of high school in a while.