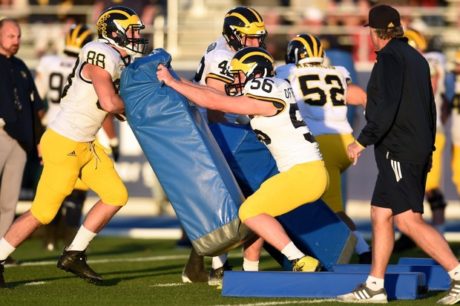 Offerdahl was a guy whose film I liked coming out of high school, and he has turned in some solid practice performances the past couple years. He was Scout Team Special Teams Player of the Week twice in 2016, and he was Scout Team Defensive Player of the Year in 2017. For that reason alone, I might have him a little underrated here at #100 overall. Good scout team players are valuable. The reason I can’t place him higher on the list is that Don Brown doesn’t bother going very deep in his linebacker rotation, and there are a handful of guys ahead of Offerdahl. Offerdahl might be getting off-season hype like the days of Kevin Leach and Mark Moundros, except there’s so much other talent available on the roster that Michigan doesn’t need a Kevin Leach this season. Offerdahl has taken incremental steps forward each season, and since he played against Ohio State, it wouldn’t surprise me at all if the coaching staff looked to him to play more special teams in 2018.