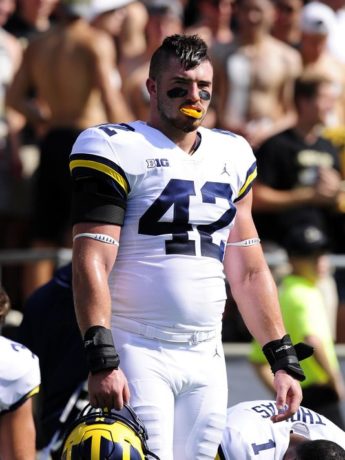 I may or may not have underranked Mason last season. On the one hand, I ranked him #77 and he scored 2 touchdowns, which is pretty good for the 77th-most important player on the team. On the other hand, Michigan had two senior fullbacks on the roster who probably could have punched in those two 1-yard touchdowns. Khalid Hill and Henry Poggi were the co-starters at fullback in 2017, but it was always likely that Michigan would plan to groom Mason for 2018, which is exactly what they did.

This spring there was a bit of a stir when it came out that Mason was playing fullback and linebacker, and Mason did an interview where he discussed his preference – according to him, he has none. He was a fullback and linebacker in high school, and he was seemingly recruited for linebacker before moving to the offensive side of the ball. He does not appear to be a strong contender for any of the linebacker positions, which makes sense to me. It’s one thing for a defensive player to moonlight as an offensive guy, but it’s a whole different story when you try to make an offensive guy into a defensive player; the only case that seems to make sense is when you put in a tall receiver with ball skills when it’s time to defend a Hail Mary. Mason should be focusing on offense, even though Michigan may use the fullback less with Shea Patterson behind center. I expect this Michigan team to be a little more spread-oriented and a little less smashmouth-y.