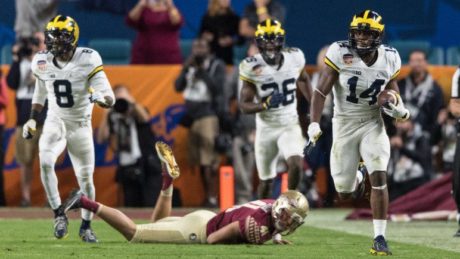 Thanks to John and Sean for the Paypal donations! You guys are awesome.

Last season I ranked Metellus a good deal higher at #12. He got some experience in 2016, and Michigan was losing two safety starters going into the 2017 season. With only freshmen and walk-ons as backups, I felt Metellus needed to stay healthy and relevant. He wasn’t terrible, but the safeties were the weakest defensive position group of 2017. Metellus really maddened the fan base when he could have made an interception to snuff out a scoring drive for Ohio State, but the Buckeyes went on to score a touchdown, gain momentum, and eventually beat the Wolverines.

This year I have dropped Metellus down to the mid-twenties, but not necessarily because of a poor performance in 2017. I have never been too high on Metellus, and the additional experience behind him makes him less important. He went from having just walk-on Jordan Glasgow, freshman Jaylen Kelly-Powell, and freshman J’Marick Woods behind him in 2017 to having all those guys one year older, plus sophomore Brad Hawkins, several freshmen, and Utah transfer Casey Hughes. It’s good to have a starter back, but there don’t appear to be any stars in the making at either safety position.