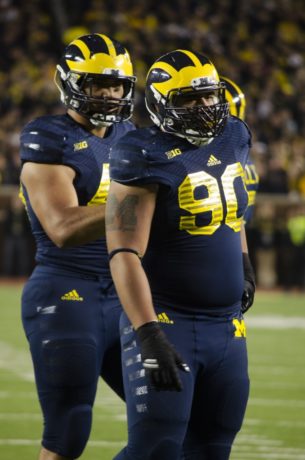 This sounds harsh, but based on Mone’s recruiting profile and the coaching available to him, he has been a bit of a disappointment at Michigan. He lost a season to a broken leg, but between the 2014, 2016, and 2017 seasons, he has made just 30 tackles, 3.5 tackles for loss, and 0 sacks during his Michigan career. I have long maintained that he bulked up too much, and he’s listed at 325 lbs. (last year he was 330). Mone is massive and holds up well at the point of attack, but he lost some quickness when he added weight, and now he’s strictly a space eater. He probably played his best game against Ohio State at the end of the 2017 season, so maybe that shows he’s rounding into form.

It’s hard to know what to expect in 2018. The starting nose tackle spot has been vacated by Maurice Hurst, Jr., and a bunch of insiders keep insisting that Michael Dwumfour is a reincarnation of Hurst. The word coming from those people is that Dwumfour and Auburey Solomon will be the starters, while Mone looks like a backup. Mone is a starter-quality player, somewhat like Quinton Washington several years ago, but he’s never going to be Hurst. Michigan probably has one of the top five defensive lines in the country with the talent at all four spots and then the depth on the interior. I’m not expecting a leap from Mone in his fifth year, but I think he should get some more snaps this season with Mone, Dwumfour, and Solomon making a nice trio on the interior.