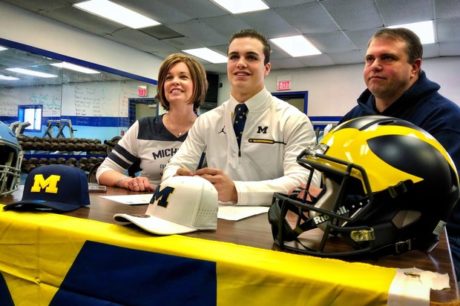 That summary after “last year” is called filling up the stat sheet, my friends. VanSumeren did a little bit of everything for his high school team, and sometimes that’s what it looks like when you have a big-time football recruit playing at a small school. Talent gap aside, it’s amazing that he just touched the ball so much, especially when 85 of those touches came on receptions. It’s not too hard to get a running back 150+ touches a year, but when a guy is lining up at receiver most of the time, that’s impressive.

I kept holding off on VanSumeren when I was making this list. I thought about him in the 60s. Then I thought about him in the 50s. Still not high enough. Then I thought about him in the 40s. And I finally thought it appropriate to place him at #39. Michigan lost co-starting fullbacks Khalid Hill and Henry Poggi, leaving behind sophomore Ben Mason and position-switching fifth-year senior Jared Wangler, plus a few walk-ons. On top of that, Mason is coming off a knee issue and might take some snaps at linebacker. With as much as Hill and Poggi played over the past two seasons, I think Mason and VanSumeren will be those two guys this year. Michigan might go with a few less fullback sets due to having Shea Patterson at quarterback and wanting to spread the field, but I still think Jim Harbaugh and Pep Hamilton are going to stick to their roots.