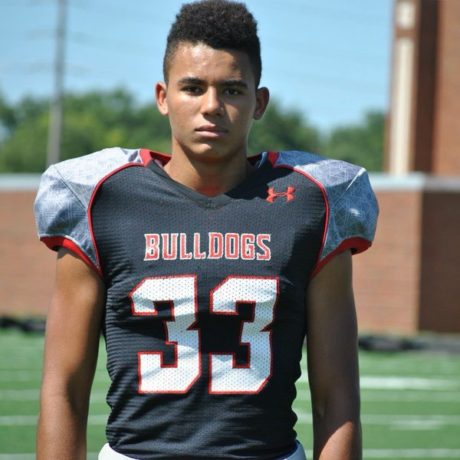 Colleyville (TX) Heritage wide receiver Kam Brown was offered by Michigan. The 6’0″, 165-pounder has offers from Alabama, Baylor, Florida State, Miami, Oregon, Penn State, TCU, Texas, and Texas A&M, among others. He’s the son of former Dallas Cowboys cornerback (and Super Bowl MVP) Larry Brown, who played his college ball at TCU. As a sophomore in 2016, he caught 46 passes for 758 yards and 12 touchdowns.

Suwanee (GA) North Gwinnett wide receiver Javonni Cunningham was offered by Michigan, and that’s the only offer for the 5’10”, 175-pounder.

Baltimore (MD) St. Frances offensive tackle Darrian Dalcourt was offered by Michigan. Dalcourt is 6’4″, 290 lbs., and the Michigan offer is his first. I think he’ll probably end up as an offensive guard unless he gets a little bit taller.

Louisville (TX) Trinity defensive end Stephen Herron, Jr. was offered by Michigan. Herron is a 6’4″, 232 lb. prospect with offers from Kentucky, Louisville, Ohio State, and Oregon, among others. He visited Michigan at the beginning of last week, which is when he picked up the offer. According to 247 Sports, he’s a 4-star, the #2 weakside end, and #15 overall. Michigan swung and missed at a couple Trinity players a few years ago (DE Jason Hatcher, WR James Quick) but didn’t have much luck.