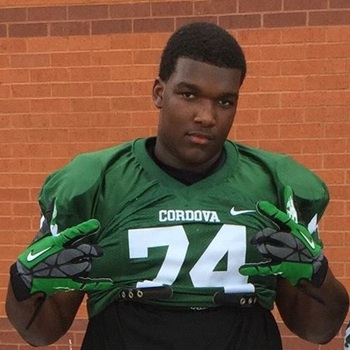 Arlington (TX) Lamar defensive tackle Bobby Brown III was offered by Michigan. He’s a 6’4″, 275 lb. prospect with offers from Alabama, Houston, Oklahoma, Texas, and Texas A&M, among others. He’s a 4-star, the #14 defensive tackle, and #152 overall. He claims a 4.63 forty, which would be mighty impressive for a 275-pounder. He plays defensive end in a three-man front in high school, but I don’t think he has the quickness to play end in college, despite the “4.63 forty.”

Hit the jump for a couple more new offers, some guys who went off the board, and some random bits.

Cordova (TN) Cordova offensive tackle Jerome Carvin was offered by Michigan. He’s a 6’4″, 325-pounder with offers from Alabama, Auburn, Georgia, Kentucky, LSU, Missouri, and Ole Miss, plus more. He’s a 3-star, the #40 offensive tackle, and #495 overall. This is an interesting offer, because it comes in the aftermath of Marquan McCall’s commitment to Kentucky (see below). According to Sam Webb, Michigan doesn’t need any more offensive guards, but Carvin looks like an interior guy. He might be able to play tackle if he loses 15 lbs. and improves his quickness, but that’s somewhat unlikely.

Baton Rouge (LA) Southern University Lab linebacker Damone Clark, an LSU commit, was offered by Michigan. Clark is 6’3″ and 218 lbs., and he also has offers from Florida, Ole Miss, and Stanford. He’s a 4-star, the #13 inside linebacker, and #322 overall. Michigan went ahead and offered a few LSU commits in the past week or so, and it may or may not have to do with the fact that LSU muscled Michigan out of a satellite camp at Tulane. This may just be Jim Harbaugh trying to make Ed Orgeron work a little bit harder to keep his guys committed.

Washington (DC) H.D. Woodson running back Mychale Salahuddin was offered by Michigan. He’s a 5’10”, 193 lb. prospect with offers from Arkansas, Maryland, Oklahoma, USC, and Virginia Tech, among others. He’s ranked as a 3-star, the #6 all-purpose back, and #334 overall. He’s a quick back and smooth athlete, and he looks like he would make a good kick returner on top of being a potential running back or slot receiver.

Oak Park (MI) Oak Park offensive guard Marquan McCall committed to Kentucky. The 6’4″, 320 lb. McCall is the #1 player in the state and #110 overall, according to the 247 Composite, so it’s somewhat surprising that he would commit to the Wildcats. Sam Webb says Michigan wasn’t recruiting him because they have Emil Ekiyor committed and a bunch of offensive guards on the roster. I don’t think McCall had the option of committing to Michigan, but I think there’s something going on there besides his position being filled.

Cibolo (TX) Steele safety Caden Sterns flipped from LSU to Texas. He’s the #4 safety and #39 overall in the class. This is a pretty huge recruiting win for new Texas coach Tom Herman, since the Longhorns have had a hard time keeping in-state talent home over the past couple years.