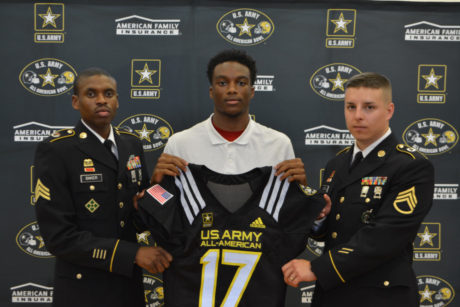 Thomas was offered by Michigan in April of 2015. There were numerous ups and downs throughout his recruitment, including a time when he publicly tweeted frustration about Michigan’s recruiting tactics late in the 2016 cycle, in regard to the Wolverines cutting ties with certain players. At the time I thought that might sour him on Michigan too much, and the staff was already in a heated battle with Michigan State. There was also a fair amount of talk that Thomas wanted to get out of the state to play football and head to warmer weather. Penn State made a late push, too, but it helped Michigan that Thomas’s cousin, Jaylen Kelly-Powell, committed to the Wolverines last month.

The first thing that stands out about Thomas – and something I’ve been saying since I found out about him as a sophomore – is that he might be the fastest football player in the state, at least out of the ones that I’ve seen. That’s been the case for the past few years. He has speed to burn, and if he gets out in front of would-be tacklers, they’re not going to catch him. I’m a big fan of getting speed on defense, so that’s a huge positive for me. There’s a clip in his senior highlights of him chasing down Detroit (MI) Cass Tech’s Donovan Peoples-Jones, who happens to be a top-10 player nationally. Thomas has good ball skills, tracks the ball well in the air, and shows good technique when the ball arrives. He’s not particularly tall for a cornerback, but he has long arms and sits right in the sweet spot for cornerbacks, the best of whom are generally around 5’10” or 5’11”.

On the negative side, there aren’t a lot of highlights of Thomas’s tackling, and I have noted that as a weakness in the past. Most of his highlights show him catching passes, returning kicks, making interceptions, or breaking up passes. He could also afford to be more physical in press man coverage, though I do think he has improved his physicality since his junior year. Adding strength to his 174 lb. frame will probably help in both of those areas.

Overall, Thomas is a very good prospect. With the way he catches and runs, he reminds me a little bit of former Michigan wide receiver Steve Breaston. While he has the skills to end up on offense like Breaston, he’s most likely to stick on the defensive side of the ball, along with potentially returning punts and kickoffs. Michigan has proven that they can coach up defensive players, and there’s no reason to expect anything less for Thomas. He’s a potential All-American down the road, in my opinion.

Michigan now has 20 commits in the 2017 class (or 21 if you’re counting prep schooler Brad Hawkins). Thomas joins Canadian Benjamin St-Juste as the class’s two cornerbacks, which makes for a nice combination of a speedy field corner and a bigger boundary guy. The Wolverines lose their two starting cornerbacks (Jourdan Lewis, Channing Stribling) to graduation after this year, and it’s unclear whether fifth year senior Jeremy Clark will get the sixth year he’s applying for after tearing his ACL. The starters next year could be Clark and an inexperienced player, or they could be two brand new players. Since Thomas is enrolling in January, that might help him on the path to starting, but my guess is that he’ll be a backup next year.

The Wolverines had a bit of a dry spell recruiting at Detroit (MI) King until last year, and now Thomas will join former cornerback teammate Lavert Hill, who signed with Michigan in 2016. Developing a pipeline at King could pay dividends down the road, although they do not appear to have another elite prospect in 2018 like they had with Hill and Thomas.