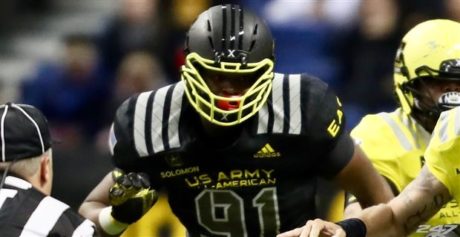 Leesburg (GA) Lee County nose tackle Aubrey Solomon committed to Michigan on Wednesday morning. He chose the Wolverines over offers from Alabama, Georgia, and USC, along with many others . . . including Miami?

Hit the jump for more on Solomon’s commitment.

Solomon committed to Michigan in June of 2016 (LINK) and then decommitted (LINK) after Michigan sent him a letter thanking him for attending the BBQ at the Big House. The only problem was that he didn’t attend the BBQ. Oh, and they also spelled his name wrong. (In my experience, spelling is not the strong suit of football coaches, but it’s still kind of a significant mistake.) Many people immediately pegged him for Georgia, but Alabama and USC also made pushes. Everything seemed all but lost when he was recorded saying “f*** Michigan” on Periscope during the U.S. Army All-American Bowl week. But he immediately had a talk with the coaching staff where the air was cleared. He claimed Alabama had a big lead up until a couple days before National Signing Day, but that turned out not to be the case.

Solomon is a big body without a ton of bad weight. He reports being just under 300 lbs., but he will probably play over 300 lbs. and look just fine. A lot of that weight is in his lower body, where he has thick legs and a thick backside. He’s fairly quick off the ball, but more so, he has quick and heavy hands that let him make initial contact with centers. He does a good job of firing out low and hard, which helps him get leverage on interior linemen. He has good closing speed and tackles aggressively rather than just grabbing on and dragging runners down.

There are very few flaws in his game, which is why he’s ranked so highly. He’s not the quickest defensive tackle, and I think Michigan will probably reconfigure his stance a little bit. As an odd-front, two-gapping nose tackle in high school, his technique will have to alter a little bit to play more of a one-gap role in Michigan’s even fronts.

Overall, I expect Solomon to be a high-level contributor from early in his career. He’s more advanced than Bryan Mone, who played as a true freshman in 2014. He reminds me of former Michigan nose tackle Alan Branch, although Branch was a late bloomer as a defensive lineman and grew into being a nose tackle. Solomon is already there.

Solomon is a huge get from the state of Georgia. Michigan has had some success over the years in the Peach State, but Solomon is huge, if not the biggest pull during the current recruiting era. The Wolverines also have his 2018 teammate, Otis Reese, verbally committed. Michigan went after fullback/defensive end Tory Carter from Lee County, too, but Carter stuck to his LSU pledge.