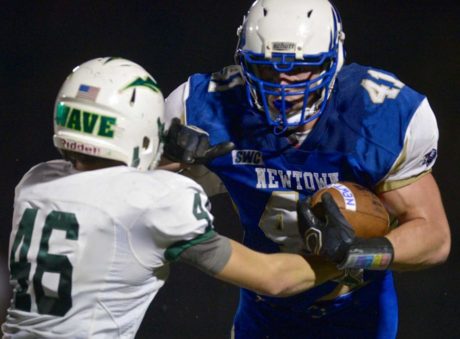 Sandy Hook (CT) Newtown fullback/linebacker committed to Michigan on Tuesday evening. He chose the Wolverines over offers from Boston College, Cal, Duke, Pitt, Rutgers, and Wisconsin, among others.

Hit the jump for more on Mason’s commitment.

Mason wasn’t on the recruiting radar much before he visited Ann Arbor on April 12. He picked up an offer from the Wolverines on the visit, and immediately Michigan seemed to jump to the forefront of his recruitment. A visit to Wisconsin also resulted in an offer, but the Badgers couldn’t overtake Michigan. When he set his announcement date for May 3, the expectation became the end result.

Mason is a player who could legitimately play several different positions in college, from fullback to tight end to defensive end to inside linebacker. Offensively, he looks like a fullback. He’s a dogged, devastating blocker who keeps his feet moving through contact and looks like he cherishes contact. When he runs the ball, he keeps his shoulders square to the line and runs behind his pads without much shimmy or shake. He catches the ball well out of the backfield, and he actually shows some pretty good route running nuance for such a big guy. Defensively, he looks like a defensive end to me. He’s fundamentally sound when he plays linebacker, diagnosing plays fairly well and keeping his shoulders square to the ball carrier. He flashes some ability to blitz and could be tough for opposing running backs to handle in pass protection. He’s also stoutly built and could handle a bit more weight to be a weakside end type of player.

What Mason lacks is quick-twitch athleticism. He’s somewhat stiff and does not change direction very well, which is why it’s important that he plays fundamentally sound football. He has a bit of an odd frame, with what looks like a more developed upper body with a relatively short lower body and narrower waist. The frame screams fullback to me. The mediocre athleticism concerns me on defense a little bit, where he’s probably a two-down linebacker who would not be an asset in pass coverage at middle linebacker. I would also have some concerns about him playing defensive end, because his frame might max out before he reaches a playable weight to hold up against opposing offensive tackles. I’m afraid that he would be limited by length and athleticism at end, relegating him to backup status.

Overall, Mason is a very curious prospect for Michigan to take this early in the process. He wants to play linebacker, but rumors have trickled out that he – like David Reese and Chase Lasater before him – is more desired at fullback. Michigan does just as much with fullbacks as anyone in the country, but the Wolverines seem to have a hard time recruiting someone who actually wants to play fullback in college. I like Mason as a fullback. I think he is limited at linebacker. I think he would potentially get buried on the depth chart at defensive end.

Michigan now has 12 commits in the class of 2017. Three are running backs and two (Lasater and Mason) are potential fullbacks. Three are potential linebackers (Joshua Ross, Lasater, and Mason). I would not expect any more fullback types in the class, because one of these guys virtually has to end up there sooner or later. Michigan’s viable fullbacks are all entering at least their fourth year on campus, including walk-on Bobby Henderson (RS Sr.), Khalid Hill (RS Jr.), Henry Poggi (RS Jr.), and Wyatt Shallman (RS Jr.), and each of them is a somewhat awkward fit except Henderson, who will be gone by the time Lasater/Mason hit campus. Hill is a tight end by trade, Poggi is a 6’4″ defensive lineman, and Shallman wants to be a tailback. The class should reach at least 20, with a good chance of going well above that number. Michigan does not recruit the state of Connecticut heavily, and the last player from the Nutmeg State was offensive lineman Todd Mossa in the late 1990s/early 2000s. It’s not a state with powerhouse football programs, though Michigan has attempted to recruit a few players from there in recent years.