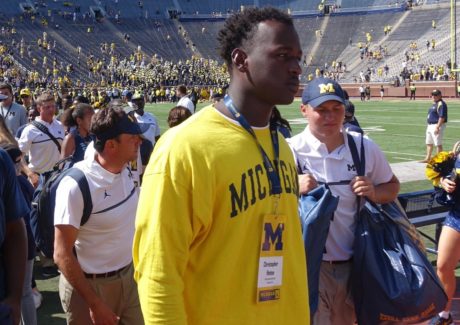 Norcross (GA) Greater Atlanta Christian defensive end Chris Hinton, Jr., a 2019 prospect, committed to Michigan on Saturday. He chose the Wolverines over offers from Alabama, Auburn, Clemson, Florida, LSU, and Stanford, among others.

Hit the jump for more on Hinton.

Hinton has a “Jr.” after his name because his dad has the same name – and the dad is the guy who played for the Colts, Falcons, and Vikings in the 1980s and 1990s. Dad was the #4 overall pick by the Baltimore Colts back in 1983, and he was eventually traded to the Falcons for the pick that became Jeff George (whose son now plays QB for Illinois). There is also a younger son, Myles Hinton, who is a 2020 prospect with a Michigan offer.

Hinton, Jr. is listed as a strongside end by the recruiting services, and he’s built like one right now. At 6’4″ and 265 lbs., he doesn’t have a ton of extra weight to shed, and he has a thick lower body. He bends well and uses his hands. He has plus athleticism for a big boy, and he anticipates well.

On the negative side, I don’t know if Hinton is destined for the strongside end position long-term. He was deemed an offensive line prospect earlier in his career, and his body type lends itself to offensive guard. Even if he doesn’t play offense, I think he will grow into a defensive tackle.

Overall, this is a very good pull for Michigan. He has the bloodlines, and he has athleticism for a big guy. Whether he plays offensive tackle, offensive guard, strongside end, defensive tackle, or nose tackle is immaterial. The most important thing is getting him on campus and finding a place where he can be successful.

TTB Rating: N/A. I won’t be posting a TTB Rating until the 2018 class finishes out, but I would tentatively place Hinton in the high 80s.