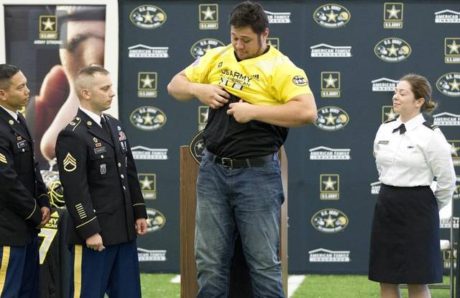 Hit the jump for more on Filiaga’s commitment to Michigan.

Filiaga was offered by Michigan in March of 2016 after a junior season spent at Murrieta (CA) Vista Murrieta. At the time he was thought to be leaning toward USC. Then he transferred to Aledo (TX) Aledo, and he was also thought to be heavily interested in Texas at one time. But over the last several months, he moved away from the Trojans and named a final three of Nebraska, Oklahoma, and Michigan. He had been thought to be leaning toward Michigan since his official visit at the beginning of October.

Filiaga is huge. Not only is he tall, but he’s solidly built from head to toe and proportioned well without being too top-heavy. He has long, big, meaty arms, and when he gets his hands on a defender, he can control him and generally get good push when he wants. Even though he’s a big guy, he bends well and can get good leverage against down linemen. He’s a particularly good down blocker, and that bodes well for Michigan’s offense, where he’ll often be asked to double-team and block down. He can get out and run in a straight line, so he can be helpful downfield or on screens.

On the negative side, it’s a bit of a red flag that Filiaga doesn’t have more film as a big-time recruit. His junior highlights are just over two minutes long, and his senior highlights last 38 seconds. It may be an issue with the film or technology or the coach, so it’s not necessarily a lack of highlight-worthy plays, but it’s still a question mark. That dearth of highlights also shows up when it comes to pass protection, because there’s not a whole lot that shows his ability to fend off edge rushers. I think Filiaga shows some weaknesses when it comes to footwork and needs to be more consistent in that area. Another inconsistency is his stance, where he frequently seems to telegraph run vs. pass or even the direction of his block. If defenders get underneath him or slant across his face, he sometimes has trouble adjusting.

Filiaga is a good prospect. He’s massive and athletic, and he was deemed talented enough to earn a bunch of offers and be chosen as a U.S. Army All-American. But I think people looking for an immediately elite fix at left tackle for Michigan are going to be disappointed. The Army All-American coaches put him at right tackle, and he stated that he was okay with that because he wanted to show off his versatility, and besides, the West team already had 7 left tackles. Okay, but why wasn’t Filiaga at left tackle instead of one of those guys? And why was he the backup right tackle? These are rhetorical questions, obviously. The point in asking those questions is to suggest that Filiaga has a way to go before he’s a plus player. He has a ton of potential, but players like Ben Bredeson and Mason Cole – the last two major freshman contributors – were further ahead when it comes to technique.

Bredeson and Cole are both almost certain starters in 2017, but Michigan lost LT Ben Braden, RT Erik Magnuson, and RG Kyle Kalis. There are openings, so I wouldn’t rule out the possibility of Filiaga starting next year, but there would be growing pains. Other options at offensive tackle include Nolan Ulizio, Stephen Spanellis, and Juwann Bushell-Beatty, along with other incoming true freshmen.

Michigan now has 27 commitments in the 2017 class, and that includes seven offensive linemen. He’s also the first commitment from the state of Texas since 2011, when Michigan pulled in TE Chris Barnett, RB Russell Bellomy, and LB Kellen Jones – none of whom did anything for Michigan. (In fact, Barnett and Jones never even made it through their first camp.) The class is expected to reach roughly 30 commits, so the Wolverines have a few spots left to fill.


You need to login in order to vote