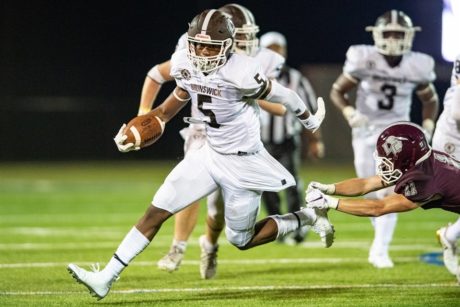 Greenwich (CT) Brunswick wide receiver Cornelius Johnson committed to Michigan on Wednesday morning, sending in his National Letter of Intent to the Wolverines instead of Alabama, Notre Dame, Penn State, Stanford, or a bunch of other schools.

Johnson was offered by Michigan in March of 2018, and he visited unofficially in April. For much of his recruitment, he was thought to be a lean toward Notre Dame, Penn State, or Stanford, but Michigan was always in his top group. In particular, Notre Dame seemed to be his likely destination for a long time. If not for the official visit he took to Michigan in mid-December, Johnson probably would have gone elsewhere. This might be a case where Michigan got the benefit of having the last word before Signing Day.

There are a lot of things to like about Johnson. He has good size at 6’3″ and roughly 200 lbs., and he will certainly add some weight to that frame over the next few years. He also has an excellent catch radius, not only because of that size, but because of his athleticism. His body control stands out, both with his leaping and his hands; at about 3:15 of the highlight video below, you can see him making an excellent catch by dragging one foot in-bounds while completely horizontal across the sideline. I also like Johnson’s body lean, which helps with his acceleration and his ability to be physical with defenders. He uses his hands well in subtle ways to shake defenders, and I like his field awareness, with which he tracks zone defenders, finds open grass, and shields the ball from defenders. Furthermore, he’s a strong runner after the catch.

Johnson has a couple things to work on, including improving his size and strength. I would like to see him become a little less demonstrative after plays, which might lead to a taunting/unsportsmanlike penalty here or there.

Overall, though, Johnson is a very good prospect. His speed is good, not great, but his ball skills and coverage awareness should make up for some of those pure speed shortcomings. He reminds me of former Michigan wide receiver Junior Hemingway, who became a 7th round NFL draft pick after becoming a physical, jump ball extraordinaire for the Wolverines.