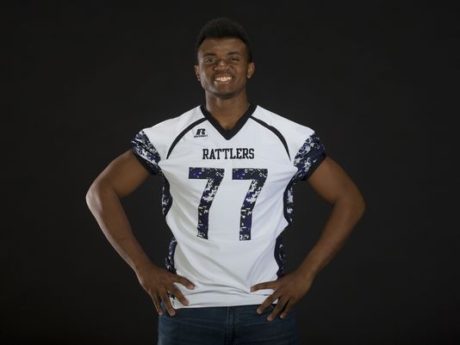 Last year I took a late look at a few positions that Michigan was recruiting down to the wire. For example, I wanted Devin Asiasi the most out of Michigan’s remaining tight end targets last January (LINK), and he signed with the Wolverines, for whom he played quite a bit as a freshman. (For the record, the other four tight end targets on that list redshirted in 2016.) As a reminder, I feel it’s necessary to mention that I specifically avoid looking at recruiting rankings while working on this piece to avoid being influenced, though this here hobby means I have a fair idea of their general ranking.

1. Austin Jackson – OT – Phoenix (AZ) North Canyon: Jackson is the least physically developed player on this list at 6’6″, 270 lbs. He’s a lithe, athletic offensive tackle/defensive end, and he almost doesn’t look like an offensive tackle prospect. Though he is largely regarded as an offensive line prospect, he almost certainly needs a redshirt to add some size in order to play OL. He’s very good working up to the second level and playing in space, and he moves his feet well in pass protection. Right now he can get overpowered at the line of scrimmage by bigger players, but I do like athletes at offensive tackle who need to fill out rather than big guys who need to learn to be athletic.

Hit the jump for the remainder of the list.

2. Toryque Bateman – OT – Gadsden City (AL) Gadsden City: Bateman is 6’7″, 310 lbs. He has long arms and looks the part of being a left tackle at the next level. He moves his feet well, and I really like his footwork in pass protect. He does a good job of getting depth and mirroring pass rushers. As a run blocker, his biggest strength is his ability to combo block on inside and outside zone runs, working his way up to the next level. He needs to play lower, and he also needs to work on his hand placement when he run blocks. Hand placement is also a bit of an issue in pass pro, and he does occasionally get his feet too narrow.

3. Mekhi Becton – OT – Highland Springs (VA) Highland Springs: Becton is listed at 6’8″, 325 lbs. He’s a huge lineman who could play left or right tackle in college. Despite having a huge frame, he is not the punishing blocker he should be. He struggles to bend, and he doesn’t finish blocks consistently. He is a plus athlete for his size, and he’s willing to get out in space and make blocks downfield. He needs to improve his footwork in both the run and the pass game. He’s very raw and tends to reach, but he has a solid punch and can be a very powerful blocker if he latches on with those long arms and that 325 lb. frame. He’s a player who probably requires a redshirt.

4. Tedarrell Slaton – OG – Plantation (FL) American Heritage: Slaton is 6’5″, 353 lbs. He plays right tackle for American Heritage, but he won’t be a tackle in college. At 353 lbs. (and I believe he weighed in the 360s at the All-American Bowl), he’s too big right now and struggles to get into a good stance. He does not use his hands very well as a blocker, and since he keeps them too low, defenders can get into his chest and control him, even when they’re grossly outweighed. Slaton has decent feet for a big guy, but he does not play through the whistle consistently. Slaton made some noise early about wanting to play basketball in college – which does not appear to be happening – and now reportedly wants to play defense. I’d take him above Lynch simply because Slaton can play nose tackle, a position that Michigan needs, but I think Lynch is the better offensive lineman right now.

5. Carter Lynch – OG – Philadelphia (PA) St. Joseph’s: Lynch has the build of an offensive guard at 6’6″, 310 lbs. with a thick lower body and a bit of a truncated frame. He moves like an interior player and does not play great in space. He looks like he could also play center. Lynch has a bit of an awkward stance that needs to be cleaned up, and he tends to come out of his stance too high. He is an aggressive blocker and perhaps the best finisher of the linemen in this list. Despite a bit of a lack of athleticism, he can be effective on trap blocks and kickouts because of his aggression and strength. He reminds me a little bit of former Michigan offensive guard Kyle Bosch (now at West Virginia). Michigan is more in need of offensive tackles in 2017, so he goes to the bottom of my list.

NOTE: As far as I know, Michigan has not been actively recruiting Lynch, but he was offered at one point.