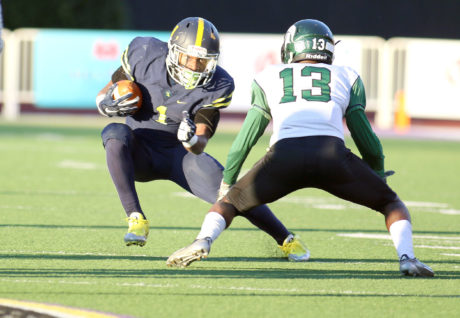 Memphis (TN) Lausanne running back Eric Gray committed to Michigan on Sunday evening. He picked the Wolverines over offers from Alabama, LSU, Penn State, Stanford, and Tennessee, among others.

This is my favorite kind of commitment video:

Hit the jump for more on Gray’s commitment.

Gray camped at Michigan in June of 2017, so the interest has been there for a while. The Wolverines’ coaching staff did not seem to be pursuing him heavily for a period, but the intensity of that courtship increased in recent months. He took an official visit in June, and according to reports right afterward, he came out of that visit as a silent commitment. It took him a week to put together his commitment video, and he made the commitment public on Sunday night.

Gray is built low to the ground with thick thighs. The statistics posted above are outlandish, and he did those things with a combination of traits, but the #1 reason (okay, and #2) is vision and change of direction. He can see blocks developing and knows whether to hit the hole or whether to hold off before shifting into high gear. He finds cutback lanes and has the ability to make several cutbacks on one play to gain extra yardage. One surprising thing about Gray is his lower body strength, because he shows repeatedly that he’s tough to take down with arm tackles. His top-end speed is above average, though not exceptional.

That lack of top-end speed sticks out as one of his most significant weaknesses. He won’t run away from a ton of defensive backs at the next level unless they take bad angles, but that’s where his change-of-direction skills will come in handy. There are also some fundamental things he will need to improve in college, like his timing and footwork in the backfield. While he does have patience with the ball in his hands, he will need to slow down some of his counter steps and sell his blocking a little better before setting up for screens.

Overall, Gray is an excellent pickup for Michigan. This is an excellent 1-2 punch with him and Charbonnet. It’s not really a thunder-and-lightning situation because neither one is one or the other, but Charbonnet is that traditional three-down back, while Gray seems like more of a third-down guy. However, Gray has the type of lower body structure that makes me think he could also be an every-down guy. I don’t pull this comparison out very often, but dare I say . . . Mike Hart? They’re both slightly undersized players who are tough, have great vision, and lack great top-end speed.