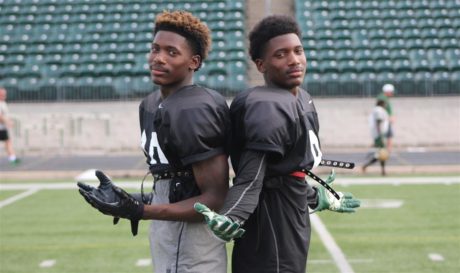 DeSoto (TX) DeSoto cornerbacks Gemon and German Green committed to Michigan on Thursday. They are twins. I thought about making separate commitment posts, but they’re used to sharing.

First up for a review, though? Gemon, because that’s how the alphabet works.

Gemon chose the Wolverines over offers from Houston, Indiana, Oklahoma, Tennessee, Texas, Texas Tech, and Wisconsin, among others. He’s 6’2″ and 165 lbs., claiming a 4.59 forty.

Gemon is a long corner with some room to fill out. He uses his length well to disrupt receivers’ routes and make plays on the ball. Even when he doesn’t get his hands on the ball, he can make it difficult for receivers to separate and create a clean target. As with a lot of long corners, he’s best in man coverage, which fits well with what Michigan does. He flips his hips relatively well to maintain position on deep routes. He does a good job of recognizing combination routes and reacting accordingly. He’s a willing tackler, albeit a little bit light.

On the negative side, he needs to add weight and strength to his 165 lb. frame. He’s a little bit stiff in his backpedal, and he does not break well on in-breaking routes, which may come when he adds some more strength. He also lacks great speed and does not offer much in the way of big-play ability, return skills, etc.

There’s not as much to glean about German, because he tore his ACL and missed his junior season. His sophomore film shows him playing JV ball, mostly at safety and slot corner. To be honest, he doesn’t look outstanding, but sometimes a year makes a huge difference when you’re talking about kids who are 16 years old.

DeSoto is a big program in the state of Texas, so this may help Michigan get its foot in the door with some other DeSoto or Texas prospects, too. The Wolverines have not generally done well in Texas in recent years, but they did land Aledo’s Chuck Filiaga in the 2017 class.

Overall, I like what Gemon Green brings to the table. We’ve seen Michigan do well with tall corners in recent years (Channing Stribling, Jeremy Clark), and there’s no real reason to believe that success can’t be replicated here.

I’m not sure what to think about German. Hopefully he can return to health in 2017 and be prepared to play college ball in 2018 and beyond. I’ll be looking forward to seeing what he looks like during his senior season.