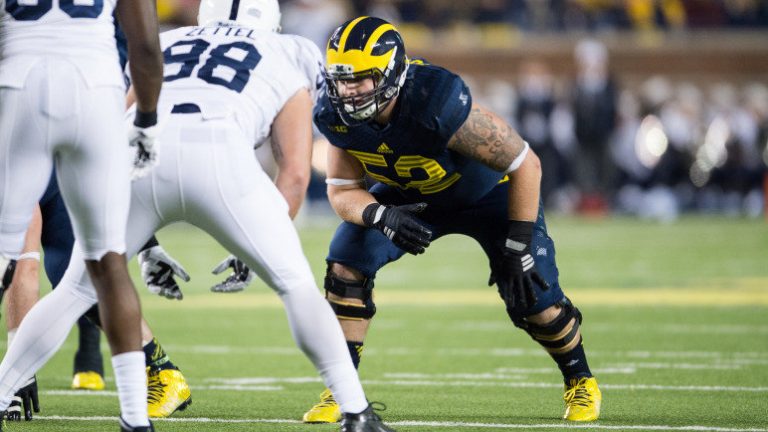 Thank you very much to Keith for the generous Paypal donation to help with hosting!

Cole attended Tarpon Springs (FL) East Lake and was a part of the 2014 class. Originally, it looked like he would bring teammate George Campbell with him in the 2015 class, but Campbell eventually decommitted in favor of Florida State. You can check out the scouting report I put together on Cole prior to his commitment (LINK). I gave him an 87 as a Final TTB Rating (LINK).

At the risk of being chastised for tooting my own horn, the scouting report linked above was pretty spot-on. I said that Cole had the agility to play left tackle, but he could play tackle, guard, or even center. While he never played guard in college, he spent most of his career at left tackle. He measured in at the Senior Bowl with short arms for a tackle, and his lack of length and bulk gave him some issues with being an effective drive blocker at Michigan. He could latch on to a guy and move his feet, but he couldn’t collapse down a whole side of the defensive line. During his one year at center in 2016, he didn’t have a lot of busted assignments but struggled to get a ton of movement. He was a solid offensive lineman, but it’s not a fluke that he topped out at 2nd team all-conference.

. . . doing whatever the team needed from him, and doing it well. You need a starter at left tackle during my true freshman year? Done. You need me to move from tackle all the way to center? Done. You’ve got a center you trust and a void at left tackle? I’m on it.

The NFL is looking at Cole as an interior lineman, most likely a center. The aforementioned short arms will preclude him from playing tackle, and he’s probably not an ideal drive blocker to play the guard position. When NFL coaches had a chance to slot him in somewhere, they made him play center at the Senior Bowl, even though he hadn’t played the position in a game since 2016. Centers aren’t viewed as being extremely valuable in the NFL Draft, so I think we will probably see Cole drafted somewhere around the 4th round.