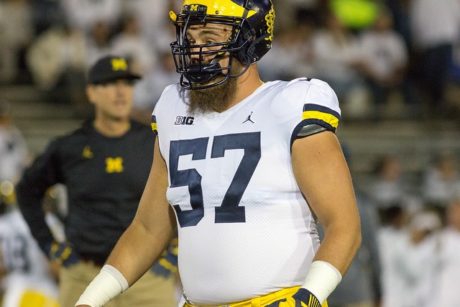 Kugler attended Wexford (PA) North Allegheny when his dad, Sean, was the offensive line coach for the Pittsburgh Steelers. Patrick was a 247 Composite 4-star, the #1 center, and #68 overall in the 2013 class. Florida, Florida State, Miami, Notre Dame, Penn State, Pitt, Stanford, and others all offered, including Purdue, where his brother played offensive line, as well. Kugler committed to Michigan in late February of 2012 (LINK), almost a year before National Signing Day. While film was lacking early in his career, I ended up giving a TTB Rating of 86 at the end of the cycle (LINK).

Kugler redshirted in 2013 and only played in one game in 2014, the opener against Appalachian State. As a redshirt sophomore in 2015, he played in three games as a backup. Kugler made one start at left guard in 2016 when Ben Braden was injured, and he played in four more games as a backup throughout the season. As a fifth year senior in 2017, Kugler started all thirteen games at center, earning Honorable Mention All-Big Ten from the media.

Even though Kugler was a tackle in high school, Michigan fans – and national evaluators – had high expectations for him. He was the projected #1 player at the center position, and he was a top-100 guy overall. With his father being an NFL offensive line coach, it was assumed he would be a relatively early contributor, particularly because the underwhelming Jack Miller was ahead of him when he arrived. A shoulder injury hampered Kugler for his first couple seasons on campus, and he even admitted in an interview last year that he did not take football seriously enough early in his career. Whether that was a reference to rehab, film study, the weight room, practice habits, or some combination of those things is unclear, but it’s not an understatement to say that his first four years on campus were disappointing. It shouldn’t take a guy with his size and pedigree five years to become a reliable contributor, but it did. Guys who played ahead of him included Jack Miller, Graham Glasgow, and Mason Cole, who converted from left tackle to keep Kugler on the bench in 2016. Kugler actually did a solid job of blocking in 2017, but there were communication issues on the offensive line, particularly with the right side. Whether that was an issue with Kugler’s calls or just with the guys on the right side, we’ll never know for sure. Considering the coaching staff is bringing him back as a graduate assistant in 2018, I have to believe the staff was confident in his understanding of the game.

. . . being the son of an NFL offensive line coach. When he was being recruited, and when he was sitting on the bench, I couldn’t help thinking, “His dad is an NFL coach! He’s got to be good, right?!?!?!”

As I mentioned above, Michigan is planning for Kugler to return in 2018 as a graduate assistant. He appears to be following in his dad’s footsteps as a coach, and he won’t be pursuing a career as an NFL player. This is probably a prudent move, since he would not be drafted and I don’t believe he would stick with an NFL team.