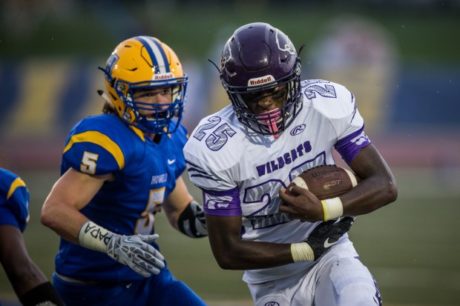 Eureka (MO) Eureka running back Hassan Haskins committed to Michigan on Sunday. He chose the Wolverines over offers from Memphis, Purdue, Wisconsin, and some MAC schools.

Haskins was offered earlier this month after he was able to get his early-season senior film out to the coaches. He had been sitting on some lesser offers, but as soon as the Michigan offer came, the Wolverines jumped out front. He took an official visit to Ann Arbor for the Rutgers game this weekend and committed during the trip.

I’ll probably take some flak for this because people don’t understand how words work, but from a running style standpoint, Haskins reminds me a lot of Adrian Peterson. He’s not as big or as strong or as fast, but he runs with the same style and idea of physicality. He’s not a blazing runner or amazingly elusive, but he has good vision and power.

Michigan now has 15 players committed in the 2018 class with Haskins in the fold and Emil Ekiyor gone to Alabama. Haskins is the second running back in the 2018 group (joining Christian Turner), and he will follow a class with two runners (O’Maury Samuels, Kurt Taylor). Of the top four running backs on the roster, only one (Ty Isaac) will be gone by next season, so Haskins should have some time to develop before needing to see the field. He’s a little bit scrawny right now, but it looks like he has the frame to be a 6’1″, 220 lb. back by his third year or so.