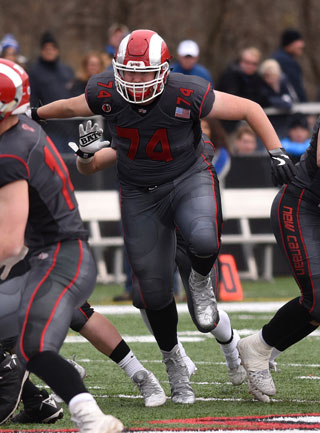 Hit the jump for more on Stewart’s commitment.

Stewart was offered and visited in March. Shortly afterward, Michigan offered his quarterback at New Canaan, Drew Pyne, a 2020 prospect; Pyne subsequently committed to Notre Dame on Monday. In between his Michigan offer and commitment, Stewart took a visit to Texas to see Baylor, TCU, Texas, and Texas A&M, and despite having offers from all but Texas, he came back with intentions to choose Michigan.

Stewart has a good frame for an interior lineman. He has the makings of a powerful base with a thick lower body. He is well trained as an offensive lineman, too. In pass protection, he does a great job of maintaining inside leverage against pass rushers and stays balanced. He keeps his head on a swivel looking for action, and he displays a powerful punch. In the run game, he generally keeps a wide base and does a good job of keeping his butt low. He runs his feet through blocks, and he finishes plays.

On the negative side, I believe Stewart is a little limited athletically. He shows decent lateral quickness, but he’s not too quick in a straight line. He needs to get more explosive in that area, which includes improving the strength in his lower body, because he can get stalemated at the point of attack.

Overall, I think this is a fine pickup for Michigan. I think Stewart could slot in at guard or perhaps center in college. He has the ability to pull, and he seems cerebral enough to be able to make line calls if necessary. His limited athleticism and lack of ideal size make him a question mark to continue to play outside at the next level. Stewart looks like a guy who will do the dirty work inside, but he probably won’t be a star player.

Michigan now has 9 commitments in the class of 2019, including three offensive linemen: Stewart, C/OG Nolan Rumler, and OT Trente Jones. Michigan has signed five players from Connecticut in the past two classes, including TE Luke Schoonmaker, WR Tarik Black, FB/LB Ben Mason, OT Andrew Stueber, and S Brad Hawkins (though Hawkins was originally from New Jersey before spending a year at prep school).