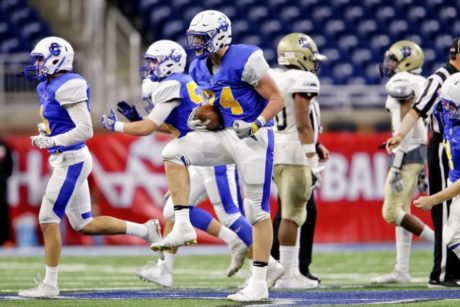 Grand Rapids (MI) Catholic Central offensive tackle Jalen Mayfield committed to Michigan on Monday evening. He chose the Wolverines over offers from Arizona, Iowa, Michigan State, Nebraska, and Pitt, among others. He was also committed to Minnesota at one point.

Hit the jump for more on Mayfield’s commitment.

Mayfield committed to Minnesota in February of 2017, and Michigan offered about a month later. Two days after hearing from Michigan, he decommitted from the Gophers. I put in a Crystal Ball for him to go to Michigan almost immediately after that. He visited for Michigan’s spring game in mid-April and finally made it public today, probably only holding off only because today is his birthday.

Mayfield is a very athletic offensive tackle or offensive guard prospect. While a large part of his highlight reel is on the defensive side of the ball, he moves very well for an offensive lineman. He can pull from his offensive tackle position, and he does a good job of turning the corner and finding moving targets. As a zone blocker, he’s quick enough to get a cutoff block from the backside, and he moves his feet after contact. He bends well at the knees and can be a demoralizing blocker if he gets leverage on a defender.

The biggest thing Mayfield lacks is bulk. At just 255 lbs. or so, he’s not big enough to hold up in the Big Ten. He’ll need to add a good deal of weight before seeing the field. He looks like a potential left tackle prospect, but I’m not sure he has a ton of experience as a pass blocker or using the footwork and technique necessary to excel at the position right out of the gate.

I see Mayfield as a left or right tackle down the road, despite just average height at 6’5″. He will probably need a redshirt year in 2018 to add bulk and improve his pass protection technique. It’s hard to guess how the tackle situation will work out with uncertainty at right tackle and an unknown entity in the injured Grant Newsome at left tackle. But I think Mayfield is a guy who should be seeing the field by at least his redshirt sophomore year, if not sooner.

Michigan now has nine commits in the 2018 class, including two offensive linemen: tackle Mayfield and offensive guard Emil Ekiyor. Technically, Michigan only has room for nine scholarships in the 2018 class. So the class is full! Except there are always unforeseen departures, injuries, etc. Many projections have the class reaching somewhere around 18-20 when all is said and done.