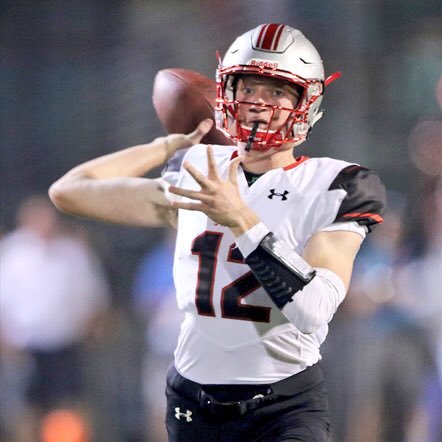 Washington (DC) St. John’s quarterback Kevin Doyle committed to Michigan this past week. He chose the Wolverines over offers from Indiana, Iowa, Michigan State, Nebraska, and Ole Miss, among others.

Hit the jump for more on the commitment.

Doyle was a recent offer after Michigan saw his high school game on television. He visited Ann Arbor a couple weekends ago and, after the offer came, he went ahead and committed. It’s unusual that quarterbacks take so little time to decide when new offers are presented, but it was an offer Doyle had been wanting for a while.

Doyle is a tall guy with a good frame for a pro-style quarterback. Listed at 6’4″ and 210 lbs., he should pretty easily hit 225-230 lbs. as his body fills out in the future. He has a high release point that should limit knockdowns at the line of scrimmage. He does a pretty good job with his footwork and keeps his eyes downfield when he scrambles.

Possessing mildly good athleticism for a high school quarterback, Doyle doesn’t have great speed and will look more limited once he hits college. He can be inconsistent with his mechanics and release, and he doesn’t appear to be a great improviser.

Overall, this is a decent pickup for Michigan, but I don’t see him as a future star. He’s more along the lines of a Wilton Speight or a John Navarre, guys who might be able to play but who have limitations. The curious thing is that Michigan could have kept plugging away with guys who are committed elsewhere like Tyler Shough (North Carolina) and Dorian Thompson-Robinson (UCLA), but now those are more unlikely since two quarterbacks are now committed to U of M. Joe Milton still says he’s 100% committed to Michigan.

Next year the depth chart will be something like this:

There are 14 commitments for Michigan right now in the 2018 class, surpassing the number of spots they have open by two (LINK). There will be some departures in the off-season to open up enough spots for the guys who are already committed, but it’s unclear just how big this recruiting class will be.