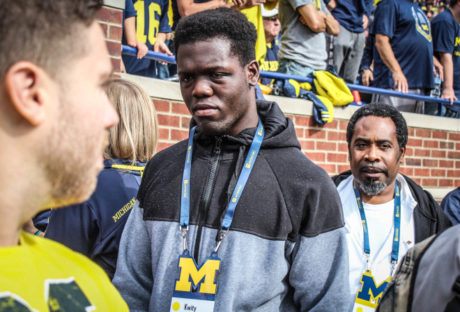 Paye committed to Boston College in December of 2015 when Don Brown was the Eagles’ defensive coordinator. Then, of course, he was offered by Michigan. After several months with the Wolverines, Brown and Michigan offered Paye. He considered the offer, took an official visit on October 1 for the game against Wisconsin, and then pulled the trigger earlier this week. It seemed to be a foregone conclusion that he would pick Michigan as long as they continued to pursue him.

Paye appears to be the alpha male on his team (if not his conference). He’s one of the biggest players, and he outclasses almost everyone when it comes to speed and hitting ability. He has a good frame for a weakside end prospect or could play a role as a 3-4 outside linebacker. He’s aware of how to use his hands, and he does a good job of keeping separation from offensive tackles to work his pass rush and play his run responsibilities. He can bend around the edge and has the speed to chase down quarterbacks from behind. He appears to be a high-motor guy who will make plays on special teams, from the backside of plays, etc. When he breaks away on offense, he doesn’t spend time high-stepping, dancing, or jogging – he just hustles across the goal line. Whether as a defender or blocker, he lays some big hits.

On the negative side, Paye plays pretty weak competition in Rhode Island. He’s the best athlete on the field, and usually by a wide margin. For example, he’s the #1 player in Rhode Island but just the #806 player in the country, according to 247 Sports. So there may be an adjustment period. He needs to get stronger – which is the case for almost everyone – but the biggest thing I see is that he needs to learn a wider variety of pass rush moves. He uses his hands already, which is good, but he generally just locks out an offensive lineman or dips his shoulder coming off the edge.

It would be difficult to argue against Michigan’s player development along the defensive line. Virtually everyone with at least three years in the program is a solid NFL prospect, and the two guys lagging behind are Chase Winovich (who spent a year at LB and then a year at FB) and Lawrence Marshall (who has had “other” issues). It’s not out of the question for those guys to get to that level, either. I’m struggling to come up with a Michigan comparison, but maybe Mario Ojemudia would be a good starting point.

Michigan now has 18 commitments in the 2017 class, including three weakside end types: Paye, Corey Malone-Hatcher, and Luiji Vilain. The class should reach 23 at the minimum, according to the 2016 Scholarship Count (LINK). Michigan only has three Rhode Island products in its database, with QB/HB Donald ZanFagna the most recent one . . . from 1948-1952.