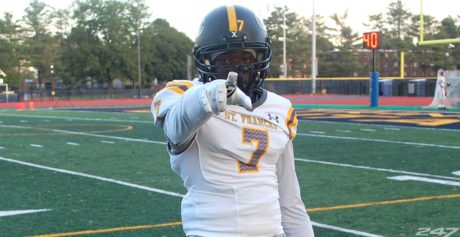 Baltimore (MD) St. Frances linebacker Osman Savage committed to Michigan on Friday. He picked the Wolverines over offers from Maryland, Pitt, and West Virginia, among others.

Hit the jump for more on Savage.

Michigan first saw Savage at a satellite camp in 2016. Michigan offered him in the fall of 2017, and the Wolverines quietly made inroads with him over the past couple years. The head coach at St. Frances is Biff Poggi, who worked at Michigan during the 2016 season and is the father of former Michigan fullback/defensive lineman Henry Poggi. Savage visited Ann Arbor for the BBQ at the Big House in 2018.

Savage is a long-armed linebacker with a solid build. He plays with an aggressive nature, and he has a natural ability to play with good body lean, keeping his chest over his knees. His long arms help him wrap up ball carriers, and he’s a solid tackler. He has above average speed and good instincts, along with good change-of-direction skills.

Not much jumps out about Savage, though. He’s not supremely big or fast or aggressive. He is a player who is good at most things, but not great in any one area.

Overall, Savage is a good piece for Michigan moving forward. He primarily plays outside linebacker in high school, but I believe he will end up being an inside linebacker (likely a WILL) in college. Because of that, I think there will be an adjustment period for him while he learns to stack and shed blockers, read blocks, and get to his pass drops. As of now he does not look like an immediate-impact type of player. He reminds me of former Michigan linebacker Mike McCray II.

Michigan now has six commitments in the 2020 class, including fellow inside linebacker prospect Cornell Wheeler from West Bloomfield (MI) West Bloomfield. The 2019 scholarship count (LINK) shows that the 2020 class should have at least 12 players in it, but we know that number will grow. The only scholarship linebackers scheduled to graduate are Khaleke Hudson and Joshua Uche, both of whom are outside linebacker types.

Michigan has never landed a player from St. Frances before, but the Wolverines currently have 14 scholarship offers out to players at the school, from the 2020 through the 2022 classes.

TTB Rating: I will not be assigning TTB Ratings for 2020 players until the 2019 class wraps.