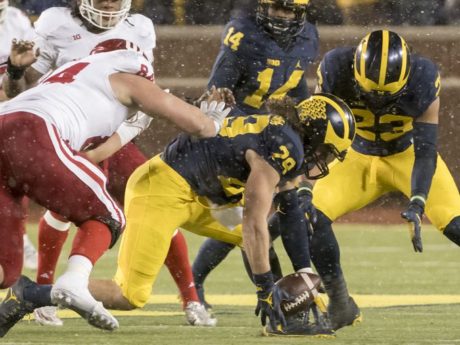 I’m posting this for umbig11, who is on the move and couldn’t post from mobile. – Thunder

Hit the jump for several nuggets, mostly on the defense.

Probably the biggest nugget of the week is that Jordan Glasgow has taken over the back up Viper spot. He has passed Furbush and Uche. He is so much faster and covers better than the other two. Gets to the ball quicker and he is a hitter. What is it with these Glasgow walk-ons?

Black continues to impress, but Gentry just keeps catching the damn ball when it is thrown his way. He is clearly ahead of Eubanks.

Carl Myers is on the two deep.

Walker has really picked it up! I still think it looks like this: Evans, Walker, Isaac, Higdon (dinged up just a little). Isaac running well between the tackles and improved his pass blocking.

One additional note from Thunder: It sounds like Juwann Bushell-Beatty will sit out the spring game with a short-term injury.