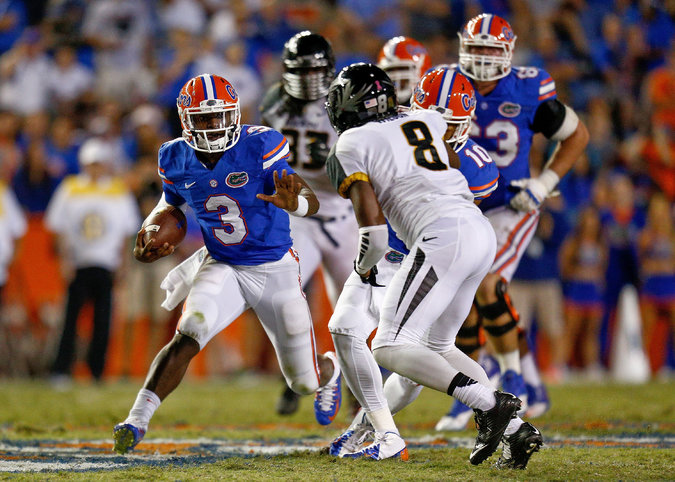 Michigan Defensive Line vs. Florida Offensive Line
Michigan’s defensive line was destroying opponents early in the season until injuries and the resulting lack of depth wore them down. Perhaps the most consistent contributor, NT Ryan Glasgow, was lost for the year with a pectoral injury, and his likely primary backup, Bryan Mone, hasn’t played at all this year after breaking his leg in pre-season practices. Meanwhile, DE Mario Ojemudia was lost for the year with an Achilles injury. Still, it’s a formidable group to face if you don’t run a hurry-up offense that prevents them from subbing and catching their breath. Redshirt junior DT Chris Wormley (6’5″, 300) has looked unstoppable at times, racking up 39 tackles, 12 TFLs, and 5 sacks. He is joined by classmate Willie Henry (6’3″, 311) at strongside end, who had 10 TFLs and led the team with 6.5 sacks in the regular season. Replacement NT Maurice Hurst, Jr. (6’2″, 282) has been solid (6.5 TFLs, 3 sacks), but he was more effective as a change-of-pace guy to Glasgow; Hurst has the quickness to disrupt things in the backfield and rush the passer, while Glasgow used strength and leverage to be a force in the run game. At the weakside end/outside linebacker position, senior Royce Jenkins-Stone (6’2″, 240) is just a guy; he can get overpowered in the run game and doesn’t do great in the pass rush. Junior backup DE Taco Charlton (6’6″, 273) came on strong to finish with 8.5 TFLs and 5.5 sacks, and he’s basically playing like a starter now. The other notable backup is redshirt junior “NT” Tom Strobel (6’6″, 270), who converted to the defensive line from the offensive line late in the year; he is susceptible to, well, just about anything since he’s undersized and has just 3 tackles to his name. The best four players are Wormley, Henry, Hurst, and Charlton, so we will see whether Charlton gets inserted into the starting lineup. The Wolverines were ranked highly early in the year, but late-season struggles due to injuries dropped them to #18 in rushing defense (123 yards allowed/game) and #25 in rushing yards allowed/carry (3.59).

On Florida’s end, they are also lacking pieces, although not due to injury. Starting RT Mason Halter is ineligible for the bowl game, so freshman Fred Johnson (6’6″, 312) is expected to start. Fifth year senior RG Trip Thurman (6’5″, 312) is the only returning starter on the unit from 2014. Michigan native Cameron Dillard (6’4″, 308), a redshirt sophomore, starts at center. The Gators also have a freshman starting at LG in Martez Ivey (6’5″, 311) and a sophomore LT in David Sharpe (6’6″, 355). It is an inexperienced group, and it shows. Florida is #89 in Adjusted Line Yards and #121 in Adjusted Sack Rate. The primary backup is freshman C/OG Tyler Jordan (6’4″, 292). They are better than Michigan’s 2013 group, but not by a great deal. Watching some of Florida’s film, Sharpe looks like a significant weak point, which is not surprising, considering his size. He is clunky and seems to telegraph plays with his stance, although Michigan does not have a great edge rusher to really mess with him in the passing game.

Michigan Linebackers vs. Florida Running Backs
The linebackers have been Michigan’s most maligned position group. Buck linebacker/defensive end was addressed in the defensive line section, so this will mainly center around the two inside guys. Captain Joe Bolden (6’3″, 232) is a senior and led the team in tackles with 76, but not many Michigan fans were happy with his play. Bolden makes very few big plays, has a hard time fighting through blocks, and doesn’t tackle well in space. The other inside linebacker is fifth year senior Desmond Morgan (6’1″, 236), who was second on the team with 67 stops. Morgan is a better tackler than Bolden, but he is a little limited as an athlete. The primary backup is junior Ben Gedeon (6’3″, 241), who some believe should have earned a chance to start over Bolden. When Michigan is not in a nickel package, they play senior James Ross III (6’1″, 232) at outside linebacker, and he’s also a backup at the Buck linebacker position (a.k.a. weakside end); Ross ended the regular season with 34 tackles, 5.5 TFLs, and 1 sack. Michigan spent a lot of time in the aforementioned nickel package with redshirt freshman safety Jabrill Peppers playing in the slot, but he’ll be addressed in the next section.

Florida’s “star” on offense is junior Kelvin Taylor (5’10”, 205), the son of former Gator and long-time Jacksonville Jaguar Fred Taylor. Taylor has carried the ball 248 times for 985 yards, an average of just under 4 yards/carry, and 13 touchdowns. He’s likely to go over 1,000 yards on the year once the bowl game is over, but averaging 3.97 yards/carry is nothing special. Freshman Jordan Scarlett was the most explosive runner on the team, but he got suspended for the bowl game after a marijuana incident. The only other back with double-digit carries is freshman Jordan Cronkrite (5’11”, 205), who averages 3.41 yards/carry. Taylor is dangerous if he has space to operate, so while he might get bottled up, that will probably be due to Michigan’s defensive line more than the linebackers. The Gators are #114 in rushing yards/game and #120 in yards/carry.

Michigan Defensive Backs vs. Florida Quarterbacks/Wide Receivers/Tight Ends
Michigan had a couple very good defensive backs this year, although one of them will probably be watching from the sidelines. Junior cornerback Jourdan Lewis (5’10”, 176) is an All-American and set a school record for pass breakups, though he made only 2 interceptions. He’s healthy. The unhealthy one is redshirt freshman safety/nickel corner Jabrill Peppers (6’1″, 205) who, among other things, made 45 tackles, 5.5 TFLs, and 10 PBUs. He hurt himself in the aftermath of the Ohio State game, reportedly had surgery, and has been seen in a cast/brace. Michigan often moved Peppers up into the box to help with the run and blow up screens, both of which he did well; he improved his coverage skills throughout the season, but that was his biggest weakness. Luckily, the Wolverines have some quality players at the safety/nickel corner positions, but they have no room for further injuries. Junior Dymonte Thomas (6’2″, 191) should step in for Peppers, and Thomas is an improvement in coverage, where he notched 7 PBUs in addition to 20 tackles. The corner opposite Lewis is redshirt junior Jeremy Clark (6’4″, 205), who has had some struggles but is physical, a good tackler, and led the team with 3 picks. The safeties will be senior Jarrod Wilson (6’2″, 210) and junior Delano Hill (6’0″, 204). Wilson is a good player, but Hill is just a guy. The only notable backup is junior CB Channing Stribling (6’2″, 178), who began the year as a starter but lost his job to Clark.

Florida QB Will Grier got himself suspended (and then announced plans to transfer), so the starter is sophomore Treon Harris (5’11”, 195). Harris is a decent runner, but he’s not much as a passer. He completes just over 50% of his passes for 7.1 yards/attempt, and he has a 9-to-5 TD-to-INT rate. He might be better in both phases if not for the weak offensive line. It might be an anemic passing game, but it can be dangerous with freshman WR Antonio Callaway (5’11”, 198), who averages 20.1 yards/catch and is tied for the team lead with 4 TDs. Junior Demarcus Robinson (6’1″, 204) is a possession guy and leads the team in receptions, though he averages under 11 yards/catch. Fifth year senior TE Jake McGee (6’6″, 249) was 2nd team All-SEC, but his 9.3 yards/catch on 41 receptions isn’t very impressive; sometimes he plays with his hand on the dirt, and sometimes he lines up in the backfield in Florida’s spread attack. Sophomore slot receiver Brandon Powell (5’9″, 184) has averages 13 yards/catch and grabbed 4 touchdowns on just 28 receptions. Key backups include sophomore TE DeAndre Goolsby (6’4″, 243) with 277 yards on 16.3 yards/catch and sophomore wideout C.J. Worton (6’0″, 195), who did not play for most of the year but came out of nowhere with a 46-yard TD against Alabama in the SEC Championship game. The Wolverines need to stay healthy for 60 minutes of football, but they should be able to clamp down on Florida’s wideouts long enough for the defensive line to pressure the skittish and inaccurate Harris.