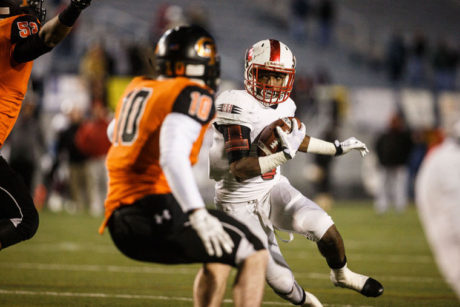 OFF THE BOARD
Ft. Lauderdale (FL) St. Thomas Aquinas running back Kyshaun Bryan committed to South Carolina. He was considered a top target of the Wolverines before they loaded up with three running backs. Bryan was a teammate of 2016 signee Nick Eubanks at American Heritage last year before transferring to St. Thomas Aquinas, where he’s a teammate of many more Michigan targets.

Bradenton (FL) IMG Academy defensive end Joshua Kaindoh committed to Maryland. Kaindoh “tricked” everyone by releasing a top four a couple weeks ago that included Michigan but not Maryland. That was despite the fact that everyone thought the Terrapins were the leaders. Unsurprisingly, he committed to the Terps on Saturday.

Savannah (GA) Christian wide receiver Demetris Robertson committed to Cal. He’s a 2016 prospect, so yes, this is very late in the process. He decided to carry his recruitment out past National Signing Day, and even past the April 1 deadline to sign a National Letter of Intent. The commitment to Cal is a surprise to most, because he had 22 predictions on the 247 Sports Crystal Ball, and all were for Georgia, Notre Dame, and Alabama. This is a huge coup for the Golden Bears, since Robertson is a 5-star and #14 overall in his class.

Mustang (OK) Mustang defensive tackle Deontre Thomas committed to Nebraska. Thomas’s recruitment moved quickly. Several weeks ago, he was a relative unknown until Michigan and a couple other schools swooped in with offers. Thomas visited Michigan in early April, and he announced a top two of Michigan and Nebraska, but the Wolverines were reportedly slow-playing him and probably would not have accepted his offer, anyway. So the commitment to the Cornhuskers was a bit of a foregone conclusion.

MISCELLANEY
A few Michigan commits have taken part in Nike camps recently, and here are some numbers:

Wanut Creek (CA) Berean Christian wide receiver Isaiah Hodgins is announcing his college decision today. He has not visited Ann Arbor, and both picks in the Crystal Ball are for Washington State. He’s the son of former San Jose State and NFL fullback James Hodgins.

Sandy Hook (CT) Newtown fullback/defensive end/linebacker Ben Mason is announcing his college decision tomorrow. There are six predictions for him in the 247 Sports Crystal Ball, and all of them are in favor of Michigan.

I didn’t hear much on visitors from this past weekend, possibly because of Michigan’s graduation and the NFL Draft. The one visitor I know of from last week was Detroit (MI) Cass Tech offensive guard Jordan Reid. The 3-star offensive guard has two Crystal Ball picks for Michigan State and one for Michigan.

Paramus (NJ) Catholic linebacker Drew Singleton committed to play in the Under Armour All-American Game. He is expected by many to pick Michigan sooner or later.

Jacksonville (MI) Trinity fullback Chase Lasater, a Michigan commit, announced on Twitter that he ran a 4.51 forty and a 4.28 shuttle at a recent combine. You never know how much to trust self-reported testing numbers, but if accurate, those are pretty fantastic times for a 6’2″, 238 lb. fullback.