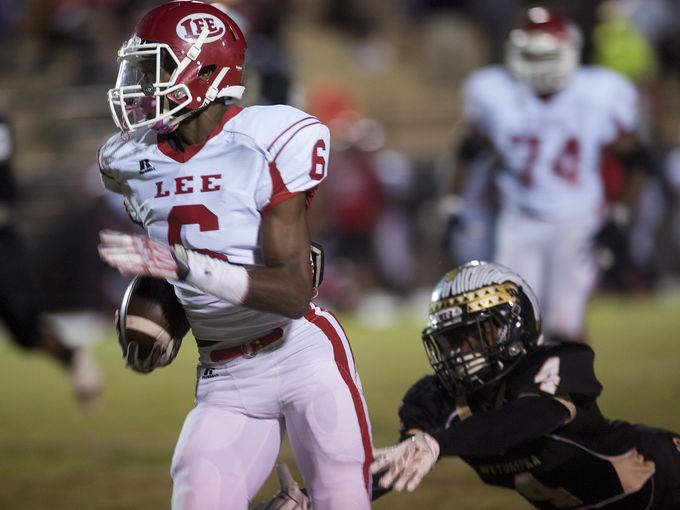 Since I got so busy with football season and completing the countdown, recruiting updates were something I put on the back burner for a while. So here’s a summative update since last we came together for a recruiting post.

Montgomery (AL) Robert E. Lee wide receiver Henry Ruggs III was offered by Michigan. He’s 6’0″, 175 lb. prospect with offers from Alabama, Auburn, Florida, Florida State, Georgia, and Penn State, among others. He’s a 247 Composite 4-star, the #29 wide receiver, and #216 overall. As a junior in 2015, he caught 44 passes for 1,007 yards and 10 touchdowns. All eleven Crystal Ball picks are in favor of the Crimson Tide.

Nashville (TN) Montgomery Bell running back Ty Chandler committed to Tennessee. He’s the #6 runnning back and #107 overall in the 2017 class.

Salinas (CA) Palma center Drew Dalman committed to Stanford. This is fairly significant for Michigan because he was considered to be a backup plan to Bradenton (FL) IMG Academy center Cesar Ruiz. If the Wolverines whiff on Ruiz (note: Michigan is probably his leader), recruiting the center position could get very interesting.

Temple (TX) Temple defensive end Taquon Graham committed to Texas after their big win against Notre Dame. It’s tough to recruit in Texas if/when the Longhorns are good, so this might be something to watch if Charlie Strong can start winning consistently.

Princeton (NJ) Hun School defensive tackle Fred Hansard committed to Florida. Hansard supposedly tried to commit to Michigan at one point, but the coaching staff asked him to hold off while they continued to evaluate the position. Understandably, that caused some friction, and he basically went off the board. By the time he pulled the trigger for the Gators, he was not really being recruited by the Wolverines.

Jacksonville (FL) Sandalwood linebacker Bradley Jennings, Jr. committed to Miami. This wasn’t a surprise by the time it happened, but earlier in his recruitment, it would have seemed to have been sacrilege, since his dad played ball at Florida State under Bobby Bowden.

New Orleans (LA) Brother Martin running back/linebacker Bruce Jordan-Swilling committed to Georgia Tech. This is quite a coup for the Yellow Jackets, who don’t typically get a lot of high-profile recruits. He’s a 4-star, the #14 outside linebacker, and #176 overall. In order to commit to Georgia Tech, he spurned the advances of Alabama, Florida, Florida State, Georgia, LSU, and Oklahoma, among others. It makes a little more sense in light of the fact that his dad, former NFL linebacker Pat Swilling, played his college football at Georgia Tech, too.

Missouri City (TX) Elkins linebacker Kenneth Murray committed to Oklahoma. He had placed Michigan in his top six and the staff was recruiting him pretty hard, but he decided to stay in Big 12 country.

Concord (NC) Concord safety Hamsah Nasirildeen committed to South Carolina. He’s a 6’3″, 210 lb. U.S. Army All-American, and I wouldn’t be surprised to see him become a linebacker in college.

Carrollton (TX) Ranchview defensive end Dayo Odeyingbo committed to Vanderbilt. Michigan had offered him after one of their satellite camps this spring. He has an older brother playing football at Vanderbilt already.

Philadelphia (PA) St. Joseph’s running back D’Andre Swift committed to Georgia. Swift was a high school teammate of Michigan offensive guard Jon Runyan, Jr. The Wolverines were occasionally mentioned as a school in which he had interest, but it never amounted to much. Swift is an Army All-American and the #37 player in the country.

Plantation (FL) American Heritage offensive tackle Kai-Leon Herbert, a Michigan commit, visited Florida last weekend and appears to be rethinking things. I wouldn’t be surprised at all if he flipped to the Gators.

Here’s a list of visitors from this past weekend (LINK).