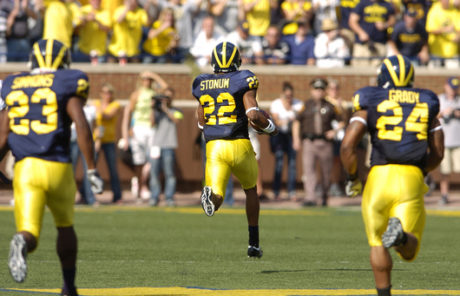 I haven’t done one of these in a while, but here’s a look back at the 2008 recruiting class – one whole decade ago.

Martavious Odoms
High school: Pahokee (FL) Pahokee
Ratings: Rivals 3-star, #71 WR
College: Michigan
Other notable offers: Auburn, Miami, Notre Dame, West Virginia
Scoop: Odoms started 11 games as a true freshman, but his playing time and productivity diminished throughout his career. He made 94 career catches for 1,087 yards and 5 touchdowns. Interestingly, he only had 7 catches in his senior year of 2011, but 3 of them went for touchdowns. He also was a punt returner and scored 1 touchdown against Purdue as a true freshman. He was not drafted in 2012 and did not play beyond college.

Terrence Robinson
High school: Klein (TX) Oak
Ratings: Rivals 4-star, #9 APB
College: Michigan
Other notable offers: Nebraska, Oregon, TCU
Scoop: Robinson redshirted in 2008 and went on to make three career starts, all of which came in 2010. He caught 2 passes for 56 yards, returned 2 kickoffs for 27 yards, returned 1 punt for 11 yards, made 6 tackles on special teams, forced 1 fumble, and recovered 1 fumble. Those defensive statistics came entirely on special teams in 2011, Brady Hoke’s first year. He did not return for a fifth year and did not play professionally.

Roy Roundtree
High school: Trotwood (OH) Trotwood-Madison
Ratings: Rivals 4-star, #44 WR
College: Michigan
Other notable offers: Nebraska, Purdue
Scoop: Roundtree redshirted in 2008 and then had a bit of a breakout campaign out of nowhere in 2009. He caught 32 passes for 434 yards (30 for 390 yards in a four-game stretch) and 3 touchdowns. He was Second Team All-Big Ten in 2010 with 72 catches for 935 yards and 7 touchdowns. With the new coaching staff in 2011, he caught just 19 passes for 355 yards and 2 touchdowns. He capped his career with 31 catches for 550 yards and 3 touchdowns in 2012. In both of his final seasons, he averaged a healthy 18.7 yards/catch. His career-high of 246 receiving yards against Illinois in 2010 was #1 all-time at Michigan until Jeremy Gallon surpassed him with 369 against Indiana in 2013. Roundtree was not drafted in 2013, spent some time with the Cincinnati Bengals before getting cut, and played in the Indoor Football League. He was the wide receivers coach at Indiana State last year, where several of Brady Hoke’s staff members now reside, and he will be returning to Michigan as a graduate assistant in 2018.

Hit the jump for a look at the rest of the receivers offered by Michigan in 2008, along with some thoughts on the class overall.

Jaron Brown
High school: Cheraw (SC) Cheraw
Ratings: Rivals 3-star, #57 WR
College: Clemson
Other notable offers: South Carolina, Tennessee, West Virginia
Scoop: After redshirting in 2008 and playing as a backup in 2009, he became a starter for 2010-2012, including spending his final year as a captain. He totaled 87 catches for 1,186 yards and 8 touchdowns over four years. After going undrafted in 2013, he signed with the Arizona Cardinals as a free agent and has been a backup since. He has 86 catches for 1,177 yards and 9 TDs during his five-year career.

Vaughn Carraway
High school: Laureldale (PA) Muhlenberg
Ratings: Rivals 3-star, #66 WR
College: Temple
Other notable offers: Pitt, Tennessee, West Virginia
Scoop: Carraway, who became a safety in college, redshirted in 2008 and was a backup through his redshirt junior year. As a fifth year senior in 2012, he started ten games. He finished his college career with 82 tackles, 3 TFLs, 6 PBUs, 2 fumble recoveries, and 2 INTs (1 returned for a 57-yard TD against Villanova). He went undrafted in 2013.

Khiry Cooper
High school: Shreveport (LA) Calvary Academy
Ratings: Rivals 3-star
College:  Tulsa
Other notable offers: Arkansas
Scoop: Cooper redshirted in 2008 and then played as a backup from 2009-2011. He had 17 catches for 140 yards and 1 TD for Nebraska during that time. He went to Tulsa as a grad transfer in 2012, where he had 3 catches for 30 yards. He went undrafted in the 2013 NFL Draft, and his career now appears to be finished. On a side note, he was also a 5th round of the Los Angeles Angels in 2008 and a 25th round pick of the Boston Red Sox in 2012, though he never played professional baseball.

Michael Floyd
High school: St. Paul (MN) Cretin-Derham
Ratings: Rivals 5-star, #6 WR, #27 overall
College: Notre Dame
Other notable offers: Florida, Miami, Ohio State
Scoop: Floyd was an impact player from day one at Notre Dame. He made 48 catches as a freshman and ramped that up to 100 yards as a senior in 2011. He caught 271 passes for 3,686 yards and 37 touchdowns. Floyd is still #1 in career receptions, receiving yards, and receiving touchdowns in South Bend, and no one is particularly close. He was a 1st round NFL Draft pick in 2012 (#13 overall) by the Arizona Cardinals. In a seven-year NFL career with the Cardinals, Patriots, and Vikings, he has 256 catches for 3,859 yards and 24 touchdowns.

Jeff Fuller
High school: Boyd (TX) McKinney
Ratings: Rivals 4-star, #12 WR, #76 overall
College: Texas A&M
Other notable offers: Ohio State, Oklahoma, Texas
Scoop: Fuller was a starter for most of his career at A&M. He made 233 career receptions for 3,092 yards and 34 touchdowns. He set the school record for career touchdown catches, but a slightly disappointing senior season saw him go undrafted in 2012, even though he had been First Team All-Big 12 in 2010 and earned Honorable Mention accolades twice. After spending two seasons trying to make it with the Miami Dolphins, he ended up in the CFL, where he has 93 career catches for 1,285 yards and 8 touchdowns in four years.

John Goodman
High school: Ft. Wayne (IN) Bishop Dwenger
Ratings: Rivals 3-star, #51 WR
College: Notre Dame
Other notable offers: Indiana, Iowa
Scoop: Goodman redshirted in 2008 and was a backup for the remainder of his career. He totaled 35 catches for 474 yards and 4 TDs through his final season in 2012. He went undrafted in 2013.

Omarius Hines
High school: Corsicana (TX) Corsicana
Ratings: Rivals 4-star, #20 WR, #163 overall
College: Florida
Other notable offers: Nebraska, Oklahoma, Texas A&M, Texas Tech
Scoop: Hines redshirted in 2008 and then played wide receiver and tight end for the Gators from 2009-2012. He caught 64 passes for 801 yards and 2 TDs during his career. He caught on with a couple teams for tryouts after going undrafted in 2013, but he never made a roster.

T.J. Lawrence
High school: Lakeland (FL) Kathleen
Ratings: 4-star, #21 WR, #165 overall
College:  Florida A&M
Other notable offers: Clemson, Miami, South Carolina, Virginia Tech
Scoop: Lawrence had 2 kickoff returns for 69 yards in 2009, but he left Florida to pursue transfer options so he could get playing time. He ended up at Florida A&M and made at least 11 catches for 166 yards in 2010, but I can’t find any statistics or information beyond that.

A.J. Price
High school: Reston (VA) South Lakes
Ratings: 2-star WR
College: Penn State
Other notable offers: North Carolina, Virginia
Scoop: Price redshirted in 2008 and did not catch a pass in 2009. He left Happy Valley after the 2009 season and did not resurface elsewhere, as far as I know.

Fred Smith
High school: Detroit (MI) Southeastern
Ratings: Rivals 4-star, #24 WR, #173 overall
College: Michigan State
Other notable offers: Illinois, Purdue, Wisconsin
Scoop: Smith caught 1 pass for 7 yards as a freshman in 2008 and then redshirted in 2009. He became a fullback by 2010. After some off-the-field issues, he planned to transfer but I can’t find evidence of him landing elsewhere.

Lamaar Thomas
High school: Ft. Washington (MD) Friendly
Ratings: Rivals 4-star, #4 ATH, #33 overall
College: New Mexico
Other notable offers: Florida, Maryland, Tennessee
Scoop: Thomas spent two seasons at Ohio State, totaling 34 catches for 721 yards and 0 touchdowns in 2008 and 2009. He then transferred to New Mexico, where he sat out 2010 and then had 14 catches for 289 yards total in 2011 and 2012. He went undrafted in 2013, made 2 catches for 31 yards for the Jacksonville Jaguars that season, and then was cut before the 2014 season. His career is finished.

D.J. Woods
High school: Strongsville (OH) Strongsville
Ratings: Rivals 3-star, #57 WR
College: Cincinnati
Other notable offers: Auburn, Iowa, Missouri, Nebraska, Penn State, West Virginia
Scoop: Woods was a backup as a true freshman and caught 14 balls for 168 yards. He became a starter for the next three years and finished his college career with 159 catches for 2,156 yards and 14 touchdowns. He went undrafted in 2012, was picked up by the Tennessee Titans, and then bounced around some to some Arena Football League teams. He was also a solid punt returner with 45 career returns for 375 yards.

Michigan did just fine in recruiting for 2008, even though there weren’t any great players. Roundtree was productive under Rich Rodriguez and did okay under Hoke. Odoms was an excellent blocker and made some big plays in a Michigan uniform. Stonum lacked the natural receiving skills to be a star, but he was still productive during his time at Michigan, and he was effective as a kickoff returner. Terrence Robinson was just a guy, but talent-wise, Michigan hit on 75% of the guys they brought in. Maybe it’s not an “A” hire, but it’s a solid “B” or “B+.”

Biggest miss: Michael Floyd. Floyd was an all-timer at Notre Dame, and he was vastly superior to anyone Michigan brought in during 2008. He probably wouldn’t have been as productive at Michigan because of the the Wolverines’ quarterback situation, but he would have helped a team that struggled mightily to throw the ball in 2008 and 2009.

Biggest bust: Fred Smith. Smith was a top-25 receiver to Rivals, and he caught 1 pass for 7 yards before becoming a fullback. Not a tight end or defensive back or linebacker, but a fullback, which is a position often manned by walk-ons or failed linebackers.