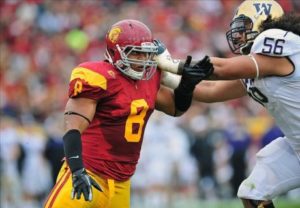 It has been a while since I posted one of these, but it’s time to start kicking them out again now that it’s the off-season. So hop into the Way Back Machine and head back to National Signing Day 2008, the first year of the Rich Rodriguez experiment in Ann Arbor.

None. Michigan landed zero defensive end recruits in the 2008 class.

Hit the jump for the targets and the whiffs.

Terrell Combs
High school: Lexington (KY) Bryan Station
Ratings: 3-star, #78 ATH, #1016 overall
College: Minnesota
Other notable offers: Louisville, West Virginia
Scoop: Combs redshirted as a freshman and then left the team in 2009 before ever contributing. He did not reappear anywhere else to play football, as far as I know.

Tyler Hoover
High school: Novi (MI) Novi
Ratings: 3-star, #42 DT, #581 overall
College: Michigan State
Other notable offers:
Scoop: Hoover redshirted as a freshman at MSU, which is the king of medical redshirts. He was a backup in 2009, a part-time starter in 2010, and then took another medical redshirt in 2011. By the time 2012 rolled around, Hoover was playing inside at defensive tackle. For his career, he ended up with 93 tackles, 9 tackles for loss, 7.5 sacks, 6 pass breakups, 3 forced fumbles, and 1 fumble recovery. He went undrafted in the 2014 NFL Draft and spent some time with the practice squads of the Indianapolis Colts and Philadelphia Eagles.

Ethan Johnson
High school: Portland (OR) Lincoln
Ratings: 4-star, #3 SDE, #36 overall
College: Notre Dame
Other notable offers: Nebraska, Oregon
Scoop: Johnson played early at Notre Dame, making 83 tackles, 16.5 tackles for loss, and 12.5 sacks in his first three years. But in 2011 he was beset by injuries and only made 14 tackles in nine games. He went undrafted in 2012 and a concussion ended his football career.

Kapron Lewis-Moore
High school: Weatherford (TX) Weatherford
Ratings: 4-star, #20 SDE, #328 overall
College: Notre Dame
Other notable offers: Louisville, Texas, Texas A&M, Wisconsin
Scoop: Lewis-Moore redshirted in 2008 before embarking on a solid playing career at Notre Dame. He made 180 tackles, 22 tackles for loss, and 12 sacks over the next four seasons. He was drafted in the 6th round (#200 overall) by the Baltimore Ravens in 2013 and made 3 career tackles before bouncing around practice squads and such.

Kavario Middleton
High school: Lakewood (WA) Lakes
Ratings: 4-star, #3 TE, #33 overall
College: Washington
Other notable offers: Miami, Oregon
Scoop: Middleton wound up playing offense instead of defense at Washington, where he played in 24 games during his first two years, making 38 receptions for 339 yards and 3 touchdowns from the tight end position. However, he was dismissed from the team in 2010 and did not continue his football career.

Nick Perry
High school: Detroit (MI) King
Ratings: 4-star, #1 WDE, #60 overall
College: USC
Other notable offers: Miami, Nebraska, West Virginia, Wisconsin
Scoop: Perry came from Michigan’s back yard and surprised a lot of people when he picked the Trojans instead of Michigan or MSU. He redshirted in 2008 but then burst onto the scene in 2009 with 8 sacks. He left after his redshirt junior year, after making a total of 103 tackles, 29.5 tackles for loss, 21.5 sacks, 6 pass breakups, and 5 forced fumbles. He was a 1st round draft pick in 2012 (#28 overall) by the Green Bay Packers, who played him at outside linebacker. In a seven-year career, he made 213 tackles, 32 sacks, 7 forced fumbles, and 1 interception.

Brandon SeSay
High school: Atlanta (GA) Douglass
Ratings: 4-star, #16 DT, #201 overall
College: Texas Tech
Other notable offers: Auburn, Clemson, Florida, USC
Scoop: SeSay committed to Georgia in the 2005 class, but he was not able to make it there academically and ended up at a JUCO, the College of the Sequoias. After two years there, he decided to transfer, which is when Michigan pursued him out of junior college. He ended up picking Texas Tech, where he played a bit over the next two years, making 8 tackles and 0.5 tackles for loss. Undrafted by the NFL, he has been playing in the AFL since 2011, and in that span he has made a total of 102 tackles and 17 sacks for Iowa, San Antonio, Tampa Bay, Portland, and Washington.

Biggest bust: Kavario Middleton. Middleton was a borderline 5-star who could have played offense or defense in college. He played offense for a couple years but never realized his potential and didn’t even last to a point where he was eligible for the draft.

Biggest miss: Nick Perry. Perry was a top-100 player coming out of high school who played like a top-100 player in college. He played well in college and the NFL. As a kid from Detroit, it was disappointing that he didn’t come to Michigan, where he could have played opposite Brandon Graham for a couple seasons. Just imagine a defense with Graham coming off the strong side edge and Perry coming off the weak side.

Best in class: Chandler Jones was a lightly recruited tight end coming out of New York who went to Syracuse. While his college career was not highly productive, he has had a long NFL career with about 90 sacks so far. There were a lot of solid players in that 2008 class (Perry, Aldon Smith, Robert Quinn, Dion Jordan, etc.), but no lifelong superstars. The best college player was probably Da’Quan Bowers, who had 26 tackles for loss and 15.5 sacks in his final season at Clemson, but injury problems hampered him at the pro level.