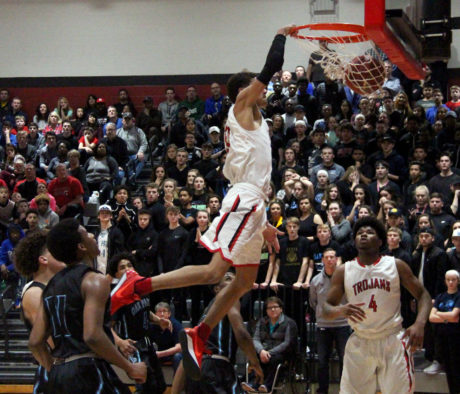 Who put that hoop on the football field? (image via Platte County Citizen)

Hit the jump for more on the commitment.

Bell signed a National Letter of Intent to play basketball at Missouri State in November, but he was released from that to attempt to further his football career. With the current football climate, it’s a bit surprising he chose the more physical sport, but Michigan football is on a slightly higher plane than Missouri State basketball. Michigan offered him on Saturday, and without visiting Ann Arbor, he flipped to the Wolverines on Monday.

Physically, Bell looks like Roy Roundtree. He’s very thin, and Rivals lists him at 165 lbs. After initially being underwhelmed with what I saw on his junior film, I noticed some positive developments on his senior season highlights. There’s actually quite a bit to like if you can get over the lack of stars and the reedy frame. The main thing that sticks out after watching him is just that he’s a very natural athlete. Whether it’s instincts or coaching or a mix of both, the kid just seems to have “it” when it comes to competing on a football field. He has a point guard’s agility, he varies his releases off the line of scrimmage, he finds the football in the air, he high-points the football, he stiff-arms defenders, he hits creases when he sees them, and he runs tough for such a scrawny kid.

So why doesn’t he have any other offers? Size is one issue, although there are plenty of undersized receivers getting college scholarships. The other thing that stands out is his lack of explosiveness. He’s not slow, but he’s not a blazer. He has the quick-twitch skills to sky for the football, but he’s not going to outrun a lot of Big Ten cornerbacks, either. So while he doesn’t jump out as a big, powerful athlete, you look at those 89 catches, those 1,605 yards, and those 21 receiving touchdowns (plus 4 more in other phases), and you think, “He finds a way to get the job done.”

On the surface, it doesn’t seem like Michigan should be “reaching” for an unranked kid in a small class when the Wolverines are 28-10 over the past three seasons. The hope is/was that Michigan would finish out the class with stars like Nick Petit-Frere, Tyler Friday, Ja’Marr Chase, etc. The end of the class seems to be wrapping up with the likes of the unheralded Bell and Ben VanSumeren (LINK), even though there’s a month and a half left until National Signing Day.

The way I look at it is this: Michigan’s leading receiver is Grant Perry, another unheralded, small receiver who put up ridiculous high school stats (105 catches, 1,727 yards, and 20 TDs) as a senior. Perry and almost any standout receiver from the New England Patriots over the last 20 years – except Randy Moss – have been no-name, unheralded slot guys who just know how to make things work. They don’t look great in the weight room, they don’t blow you away with their workout numbers, but they make the tough catches and keep the ball moving down the field. Perry will be a senior in 2018, and it’s not clear whether someone else is ready to take over that type of role. Will it be Eddie McDoom? Oliver Martin? Or maybe Ronnie Bell?

Michigan is now up to 18 commitments in the 2018 class (LINK), and they will need to lose 3 scholarship players before getting down to 85 for next season. The last player Michigan successfully recruited from Park Hill was defensive tackle Ondre Pipkins, who transferred and finished his career at Texas Tech.