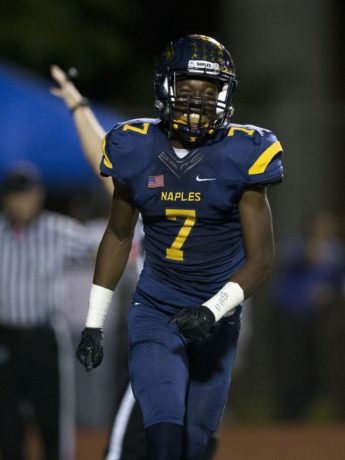 Naples (FL) Naples safety Sammy Faustin committed to Michigan last Wednesday. He picked the Wolverines over offers from Arizona, Kentucky, Maryland, UCF, and USF, among others.

Hit the jump for more on Faustin’s commitment.

Faustin was offered by Michigan this spring, and it was a bit of a surprise offer – something Jim Harbaugh has become known for in Michigan recruiting circles – because no other big programs were going after him. Defensive coordinator Don Brown liked him, and the Wolverines jumped out to the forefront of his recruitment. It was unclear if Michigan would keep pushing for Faustin or let him commit, but when he was invited to the BBQ at the Big House, that seemed to indicate he was a take. Shortly after the BBQ, he made his commitment public.

Faustin is a solidly built safety prospect. He’s listed anywhere from 177 to 190 lbs., but he shouldn’t have a ton of weight to add when he hits campus. He’s fluid flipping his hips out of his backpedal, and he’s willing and able to break on short throws and support the run. He’s a solid tackler and shows the ability to wrap up and drive through contact. His anticipation skills are above average, and he makes some hustle plays. His best asset is probably his physicality, whether it’s in coverage or tackling.

That 4.63 speed isn’t spectacular, and he doesn’t have great makeup speed. He doesn’t seem to be a difference-maker from an athletic perspective at the next level, and he lacks the added bonus of being able to contribute in the punt/kick return area. He could also afford to be more consistent with his tackling attempts, since there are several occasions where he’s just happy to dive at receivers’ legs and try to take them out without wrapping up.

Overall, Faustin is an uninspiring but solid pickup. His playing style reminds me of Jeremy Clark, a guy who’s going to be physical and consistent as a player, but who probably won’t make many flashy plays. Michigan has had success with these types of players over the past couple years (Clark, Delano Hill, Channing Stribling), and I think Faustin could play boundary corner or either safety position. He may have a chance to redshirt in 2018 since no defensive backs are scheduled to graduate, but I think Faustin could contribute as a freshman.

Michigan now has 13 commitments in the 2018 class, including four total defensive backs: Faustin, Spider Sims, Gemon Green, and German Green. The Wolverines will continue to recruit elite defensive backs like Isaac Taylor-Stuart and Josh Jobe, but their pursuit will probably slow down with some others. The only other Michigan player from Naples High School was safety Ken Mouton in the 1980s, and defensive tackle/fullback Brady Pallante was from Naples (FL) Barron Collier.