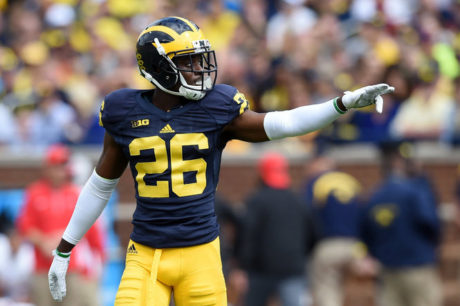 Projected starters: Senior Jourdan Lewis had an All-America season last year when he made 52 tackles, 3.5 TFLs, 1 sack, 2 INTs (1 TD), and a school-record 20 pass breakups. The other side is a bit murkier, but senior Channing Stribling may be the best bet. He started four games last season and finished with 17 tackles, 2 INTs, and 3 pass breakups, including picking off a botched fake field goal by Florida in the bowl game.

Hit the jump for more on the cornerback position.

Departures: Little-used defensive back Terry Richardson announced his intentions to spend his final year of college ball elsewhere, although his landing spot has yet to be determined. Despite being a highly touted recruit, he barely saw the field in four years at Michigan.

Backup battle: The most heated battle for the starting gig will be between Stribling and fifth year senior Jeremy Clark. Clark led the team in interceptions last year with 3, while also making 21 tackles and 3 pass breakups. Clark is just about the biggest cornerback you’ll see at 6’4″, 210 lbs. but he makes up for a lack of great speed by using his length and reach advantage. If it were up to me, Clark would be above Stribling, but I just get the feeling Stribling will get first crack at the position once again. Redshirt sophomore Brandon Watson is physical but not as athletic as the top three corners. Redshirt freshman Keith Washington is still very skinny at 6’2″, 170 lbs., but the coaches like his speed and attitude. Redshirt junior Reon Dawson technically exists, but he has not stepped on the field even once during his first three years. Junior Freddy Canteen started off at wide receiver initially, moved to corner early last season, and is now reportedly getting a chance at both receiver and corner. Either way, he does not appear to be strongly in the mix for a starting position.

#1 thing to watch: Michigan’s top three cornerbacks are seniors, and nobody else got noteworthy experience in 2015. Who will take over their spots next year? Watson and Washington are the most likely guys on the current team to stake their claim for a starting position in 2017, but there are some highly touted freshmen joining the team in the summer. I will be interested to see if someone steps up this spring, because if not, there could be a youth movement soon. I imagine a couple of those backup corners are feeling the pressure to perform.