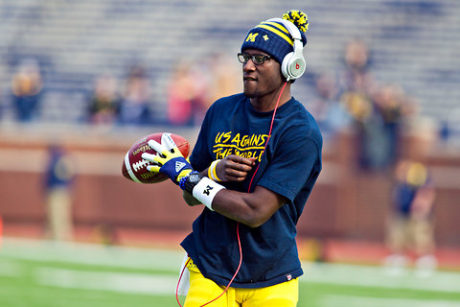 Here’s a link (LINK) to a review of my 2013 season predictions if you like to look into the past.

As for the future, here we go:

Leading Rusher
I’m backtracking a little bit here. It seemed like De’Veon Smith was getting a little more hype at the beginning of the summer, but now Brady Hoke is saying that Derrick Green would be getting the first carry against Appalachian State. I have always thought that Green had more upside because of his superior speed, so hopefully the line can block well enough to get him to the second or third level.
Prediction: Green, 700 yards

Leading Receiver
The best receiver on the team is clearly Devin Funchess, and I think this is a pretty obvious pick, barring injury. The only real question appears to be whether he’ll break the 1,000-yard barrier. Offensive coordinator Doug Nussmeier likes to run the ball, and he seems to like to spread out the ball among his receivers.
Prediction: Funchess, 950 yards

Leading Tackler
Michigan rotates linebackers a lot, so I don’t think the tackle totals for any one player will be astronomical. It looks like Desmond Morgan will rotate in with both Joe Bolden and Jake Ryan, and the combination of James Ross and Royce Jenkins-Stone looks pretty neck-and-neck right now, too. Throw in a dose of Ben Gedeon, and nobody racks up the tackles. Last year’s leading tackler was cornerback Raymon Taylor, but Michigan’s tighter coverage will hopefully prevent as many completions in front of the corners.
Prediction: Ryan, 75 tackles

Hit the jump for the rest of the predictions.

Leading Sacker
Strongside end Brennen Beyer has never been much of a pass rusher, and the edge rushing of Jake Ryan is not as much of a threat with Michigan’s move to the Over front. I think the clear selection here is weakside end Frank Clark, who turned on the jets in the second half of 2013.
Prediction: Clark, 8 sacks

Leading Interceptor
Tighter man seems to lead to more picks for safeties, because they play over the top of quarterbacks trying to fit balls into tight windows, and the safeties get some bounces, too. I’m tempted to pick Jarrod Wilson for that reason, but I’ll stick with First Team All-Big Ten selection Blake Countess, who had 6 picks last year.
Prediction: Countess, 5 interceptions

Breakout Offensive Player
Michigan will probably continue to struggle to run the ball, although I do expect the running game to improve a little. Derrick Green looks like a good choice, but I might wait until 2015 for him, once the offensive line has some experience and age. Instead, I’ll go with a guy who has been playing quite a bit on special teams but appears #1 on the depth chart at slot receiver. I have some questions about Dennis Norfleet’s hands, but he could be a dynamo in the slot if he can catch some short passes and get into space. He won’t light the world on fire, but he could be fun to watch.
Prediction: Norfleet

Breakout Defensive Player
This is a very difficult choice, because I think several players are going to take large steps forward this season. I think Jarrod Wilson will turn into the ball hawk that Michigan fans have been looking for at the safety position. I also think Willie Henry is going to be very tough for opponents to handle at the 3-tech position. I don’t like to do this, but I’ll go with the bandwagon pick in freshman Jabrill Peppers. The nickel corner position is involved in a lot of different things, and Peppers seems like a guy who’s quick/strong enough to blitz effective, speedy enough to cover, and stout enough to stop the run.
Prediction: Peppers

Most Disappointing Offensive Player
Michigan fans want big things from the offensive line, but I don’t think they’ll get them with Ben Braden at right tackle. He’s huge, but I think he’s still a year or two away from actually being good. He’s stiff in pass protection and teams are going to confuse him with stunts. The left side looks to me like the strong side.
Prediction: Braden

Most Disappointing Defensive Player
I think Michigan fans are going to be disappointed in Ondre Pipkins by the end of the year. He was a 5-star recruit (to ESPN), but he’s coming off an ACL tear and didn’t look great before the injury. It would have been beneficial for him to redshirt either this year or last, but the injury came too late in the season to apply for a medical scholarship in 2013.
Prediction: Pipkins

September 6 at Notre Dame: WIN. Notre Dame is going through some turmoil, probably missing some starters, moving to a different defense, and a little overrated, in my opinion.

September 20 vs. Utah: WIN. This might be a close game, but I think Michigan will pull it out.

September 27 vs. Minnesota: WIN. The Gophers scare me a little bit this season, and they have been improving. I’ll stick with the Wolverines since the game is in Ann Arbor.

October 4 at Rutgers: WIN. If nothing else, Michigan will win this with their defense. I can see this type of game being frustrating for Michigan offensively.

October 11 vs. Penn State: WIN. I think the Nittany Lions might be another year away from being very good, so Michigan wins it because the game is in Ann Arbor.

October 25 at Michigan State: LOSS. Michigan’s offensive line woes will once again frustrate Michigan, but this is a game I could see coming down to the final play.

November 1 vs. Indiana: WIN. Practicing against a little more up-tempo offense might help Michigan’s defense against the Hoosiers, and they also lost quarterback Tre Roberson to transfer.

November 8 at Northwestern: WIN. Northwestern is stout up the middle on defense, but Michigan can beat them on the edges. And the losses of quarterback Kain Colter and running back Venric Mark do not bode well for the Wildcats’ chances.

November 22 vs. Maryland: WIN. I think Michigan has the athletes to match up with Maryland’s wide receivers, who are dangerous nonetheless.

November 29 at Ohio State: LOSS. The addition of Larry Johnson as the defensive line coach in Columbus is the clincher for me in this one. I feel like the Buckeyes will be able to control the line of scrimmage, and the game is in the terrible state of Ohio.