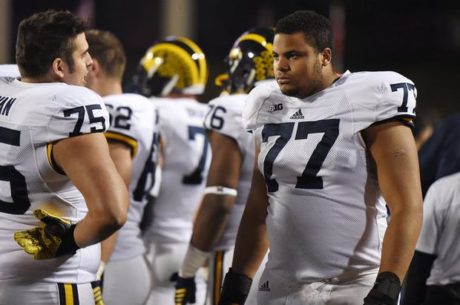 Newsome came off a freshman season in 2015 when he was the sixth offensive lineman, and with Mason Cole moving to center for 2016, there was a spot open at left tackle. Newsome was recruited as a left tackle and had the best frame for the position, and he was a natural fit, even if he was a little bit raw. He played even better than I expected for the first four games as a starter. And then Wisconsin happened. Pulling for the left cornerback, the corner went low and took out Newsome’s knee – literally. He eventually walked off the field with help, but he spent 38 days in the hospital due to complications. He later admitted that he was close to having his leg amputated, and his life was somewhat in danger.

I kept Newsome on my 2017 depth charts for a while due to the uncertainty, even though rumors were floating that he wouldn’t return for the season. Jim Harbaugh was publicly saying that he expected Newsome to be ready for the season, but this spring, Harbaugh admitted that they’re probably aiming for a 2018 return. I would love for Newsome to be available this fall, but he needs the time to fully recover. He should sit out this season and be ready for his redshirt junior year in 2018.

The 2017 Season Countdown is Coming

It has been a yearly tradition ’round these parts to count down to the season with a full accounting of every scholarship player and several walk-ons. This year will be no different. In the coming weeks, you will see a countdown of roughly 100 Michigan football players, from least important to most important for 2017 team success. Here’s a link to last year’s countdown, if you’re interested (LINK).

This is my annual caveat: The countdown looks at players from a perspective of value, so a good player at a deep position may not be ranked as high as high as an equally good player in a shallow position. Michigan doesn’t have many options at safety this year, so that bumps up the importance of the top few guys. On the other hand, there are a bunch of wide receivers available – none of whom have really separated themselves – so their value dips a bit.

Feel free to make your case for your guy(s) here.