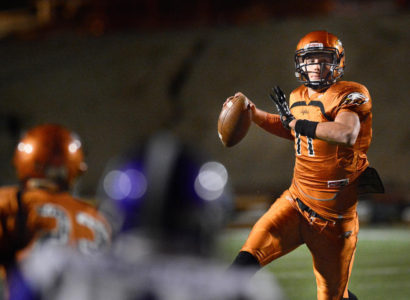 Albuquerque (NM) Eldorado quarterback Zach Gentry committed to Michigan on Saturday. He originally committed to Texas in May of 2014 and was solid to the Longhorns until recently. He chose Texas – and then Michigan – over offers from Alabama, Nebraska, Oklahoma State, TCU, and Tennessee, among others.

Gentry is a 6’6″, 230 lb. prospect whom I scouted (LINK) last January when Michigan was sorting through quarterbacks for the 2015 class.

The story with Gentry is a little bit unclear at this point. Gentry was on Michigan’s radar early in the 2015 recruiting cycle and garnered a visit from then Michigan offensive coordinator Doug Nussmeier, who watched Gentry throw and then took a pass on offering him. In the meantime, Michigan pulled in quarterback Alex Malzone, and Gentry committed to the Longhorns. He seemed solid to Texas and dismissed overtures from several schools, including Alabama. Then Harbaugh came calling, and it made Gentry rethink his decision. Depending on whom you believe, the Longhorns’ continued pursuit of 247 Composite 5-star Kyler Murray (committed to Texas A&M) and 4-star Kai Locksley (committed to Florida State) was off-putting to Gentry. Or there are rumors that Texas is looking to become more of a spread option team. Or it might be that Harbaugh has a reputation for coaching up quarterbacks, whereas Texas head coach Charlie Strong has a shorter resume (albeit one including Teddy Bridgewater). Regardless of the reason(s), Gentry accepted an invitation to Ann Arbor this week, and it paid off with a flip.

In case you’re wondering, Texas still has 3-star Brandon Merrick’s commitment, plus the potential for one of the aforementioned players.

In reviewing Gentry’s senior film, it’s clear that he has a lot of upside. He has a good arm – not great – and throws a catchable ball. Accuracy is tough to gauge from highlights, but he has a decent completion percentage and doesn’t throw many interceptions. It’s important to remember that good high school quarterbacks often suffer from poor receivers who can’t get open, drop a lot of balls, etc. (and some receivers are cursed by poor quarterback play, too, so it goes both ways). Gentry has a three-quarters delivery that might be more of a cause for concern if not for his 6’6″ frame, sometimes listed as big as 6’7″. In regard to throwing the ball, he looks very natural on the move and can push the ball down the field while getting out of the pocket, particularly going to his right. Moving is one of his big strengths. Gentry has very good speed, a little bit of shimmy, and some good instincts when it comes to running the ball. While he won’t be a threat to take it the distance very time, he’s every bit as mobile as a guy like Ohio State’s Cardale Jones, who moved the chains against some good defenses with some timely scrambles.

On the negative side, Gentry has some mechanical issues aside from the arm slot. He also tends to throw off his back foot or falling to the side without stepping toward his target, which causes the ball to hang a little bit. His footwork when taking shotgun snaps needs work, and he’s exclusively a shotgun/pistol guy, so getting him to drop back from under center might be a large undertaking. My biggest concern with him is that the ball rarely comes out “on time” within the framework of the play. He never plants his back foot and throws. I am not a fan of the way his team’s routes are designed and plays are run, and these are not the complicated route combinations he will be seeing in college. New Mexico is not known for its football, and it shows – not only in his own team, which lacks refinement, but also in the play of his opponents.

Overall, Gentry is a high-quality commitment for Michigan and Jim Harbaugh, but he’s also a boom-or-bust type. He’ll be a long way from home, learning an offense with pro-level reads and combinations, and competing with several other guys for playing time. At the same time, he will either be the most gifted (or second-most behind Shane Morris) athlete at the position. The whole playbook is open for a guy like this, who can throw it deep, throw it short, stand in the pocket, roll out, scramble, or do some designed runs. Fellow 2015 classmate Alex Malzone is more refined and ready right now, while Gentry has the better long-term potential. For better or worse, watching Gentry’s film reminded me of Utah quarterback Travis Wilson.

This gives Michigan eight commits in the 2015 class, and Gentry follows defensive end Reuben Jones as the only two guys (so far) to commit to Jim Harbaugh. Word has spread that Harbaugh could very well go after two quarterbacks in each class, and this starts off that trend with a bang. Five of the eight commits are offensive players. According to the Bentley Historical Library, this is just the second Michigan commit out of New Mexico in over a hundred years, with just defensive tackle Alan Branch coming out of Rio Rancho (NM) Cibola in that time.