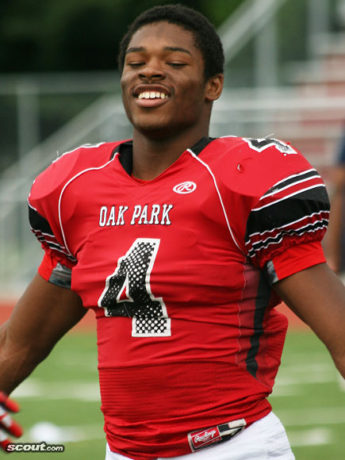 DECOMMITMENT
Richmond (VA) St. Christopher’s cornerback Garrett Taylor decommitted from Michigan. Taylor had committed to Michigan (LINK) this past spring, but in recent weeks, he had set official visits to Ohio State and Penn State. Taylor tore his ACL prior to the beginning of his senior season, so he hasn’t played and won’t play this year. However, he is still getting attention from heavy hitters, and he will not be considering Michigan going forward. He’s currently a 247 Composite 4-star, the #12 cornerback, and #107 overall.

ADDED TO THE BOARD: 2015
Oak Park (MI) Oak Park safety John Kelly was offered by Michigan. He’s a 5’9″, 191 lb. prospect with offers from Michigan State, Minnesota, and some MAC schools. He’s a 247 Composite 3-star, the #63 athlete, #661 overall, and #9 in-state. Kelly was offered after cornerback Taylor’s decommitment, but Michigan wants Kelly as a safety. He also plays running back in high school. Kelly claims a 4.6 forty and while he’s not a burner, he is a good all-around player. Initial readings have him leaning toward Michigan State, and his comments upon receiving the Michigan offer were not particularly overwhelming in favor of the Wolverines. He may visit this coming weekend for the game against Indiana.

Lawrenceville (GA) Central Gwinnett outside linebacker Adonis Thomas decommitted from Florida. He’s a 247 Composite 4-star, the #10 outside linebacker, and #171 overall. Thomas has never shown much interest in Michigan, seems to like Alabama, and has scheduled visits to Oregon and LSU.

Hit the jump for players who committed elsewhere and some other miscellaneous tidbits.

OFF THE BOARD
Indianapolis (IN) Ben Davis linebacker Asmar Bilal committed to Notre Dame. At one point he was down to Michigan and the Fighting Irish, but he always seemed to be leaning toward playing in South Bend. The two programs’ diverging trajectories seemed to make the decision pretty clear. Bilal is friends with 2015 Michigan commit Darrin Kirkland, Jr., a fellow Indianan.

Orlando (FL) Timber Creek running back Jacques Patrick committed to Florida State. He was generally considered to be an FSU lean, and the one thing seemingly drawing him to consider Michigan was his uncle, who is a coach in Detroit. However, nobody really seemed to believe he had any chance of being a Wolverine.

Missouri City (TX) Ridge Point outside linebacker Cameron Townsend committed to Texas. The Longhorns are traditionally a recruiting powerhouse, but they’re currently Rivals’ #15 class with 18 commitments, 13 of which are just 3-stars. First-year head coach Charlie Strong has been cleaning house in Austin and trying to get his types of guys in there, which might have something to do with the slightly depressed state of their recruiting.

MISCELLANEOUS
Michigan lost one scholarship for the class of 2015 when it was announced that true senior linebacker Desmond Morgan would redshirt and return next season as a fifth year senior. Of course, it’s probably better to have a fifth-year potential captain returning than a freshman who might wash out, so this is a positive for the Wolverines. This means that the 2015 class is scheduled to include 11 players (LINK) instead of 12, although that number will probably grow with some other early departures.

Here’s a list of players who visited East Lansing for the Michigan vs. MSU game (LINK).

Over on Recruiting Season, I updated the profile of Oak Park’s John Kelly and Plymouth’s Michael Jordan.

The following prospects have been noted by me as visitors to Michigan for the week. It’s not completely clear whether some of them will compete at Michigan’s summer camp this week or not. I would expect most of the ones with Michigan offers to just be visiting, but those without offers (such as Holyfield and Malone-Hatcher) seem to still be trying to make a name for themselves and will probably be participating in the workouts.

2015
Asmar Bilal – LB – Indianapolis (IN) Ben Davis: Bilal is a 6’3″, 205 lb. prospect with offers from Michigan and Notre Dame (and lots of others, but those two are the ones that really matter). He’s a 247 Composite 4-star, the #7 inside linebacker, and #225 overall. As a junior in 2013, he made 106 tackles, 4.5 sacks, and 1 fumble recovery. Bilal visited Michigan earlier this spring with Darrin Kirkland, Jr. – who has since committed to the Wolverines – but the presumption is that the Fighting Irish lead.


Chris Clark – TE – Avon (CT) Old Farms: Clark is a 6’6″, 247 lb. prospect with offers from Alabama, Arizona State, Auburn, Florida State, Michigan, Michigan State, Notre Dame, Ohio State, and tons of others. He’s a 247 Composite 4-star, the #2 tight end, and #100 overall. As a junior in 2013, he caught 39 passes for 417 yards and 6 touchdowns. Clark recently performed well in the Rivals 100 Five-Star Challenge and impressed people with his receiving skills, although he suffered a minor injury. He plans to announce his final college decision during Nike’s The Opening in early July, but he was previously committed to North Carolina, so any commitment at that time should be taken with a grain of salt. He thoroughly enjoyed a spring visit to Michigan and said the Wolverines led at the time, and the thought is that Michigan still leads. Whether they can hold onto that lead into July (or into National Signing Day) is another issue, but for now, things look good.

Shane Lemieux – OT – Yakima (WA) West Valley: Lemieux is a 6’6″, 285 lb. prospect with an offer from Michigan but who committed to Oregon in May. He had originally planned to visit Michigan during this time, but that was prior to his verbal commitment. I assume he is not visiting now, but I’ll leave his name on here since I haven’t heard confirmation either way. He’s a 247 Composite 3-star and the #31 offensive guard.

2016
Elijah Holyfield – RB – Atlanta (GA) Woodward Academy: Holyfield is a 5’11”, 190 lb. prospect with offers from Kentucky, Minnesota, Mississippi State, Ohio State, Tennessee, and Wisconsin. As a freshman in 2012, he carried the ball 66 times for 645 yards and 10 touchdowns. He claims a 4.55 forty, but on film, his speed is not particularly impressive. He is the son of former heavyweight boxer Evander Holyfield.

Matt Heuerman – TE – Naples (FL) Barron Collier: Heuerman is a 6’6″, 200 lb. prospect with no FBS offers at this time. He’s the brother of Jeff Heuerman (Ohio State), whom Michigan offered a few years ago, but their father played basketball for the Wolverines. He attends the same high school as incoming freshman defensive tackle Brady Pallante.


Janarius Robinson – DE – Panama City (FL) Bay: Robinson is a 6’5″, 230 lb. prospect with offers from Clemson, Florida State, Michigan, South Carolina, and Tennessee, among others. He’s a 247 Sports 4-star, the #5 weakside end, and #65 overall. Robinson has openly stated that his favorite team is Florida State, and that’s his likely destination, but he did make almost immediate plans to visit Ann Arbor after receiving his offer from the Wolverines, so they will have a chance to sway him.

Clark Yarbrough – OT – Woodberry Forest (VA) Woodberry Forest: Yarbrough is a 6’5″, 255 lb. prospect with offers from Florida, Maryland, Tennessee, and Virginia Tech, among others. He’s a 247 Composite 4-star, the #16 offensive tackle, and #158 overall. His sophomore year in 2013 was his first year playing organized football.

2017
Corey Malone-Hatcher – DE – St. Joseph (MI) St. Joseph: Malone-Hatcher is a 6’3″, 205 lb. prospect with no offers currently, but he will likely be one of the top few prospects in the state of Michigan for his class. He came away raving from a spring visit to Alabama, so that may be an obstacle if they extend an offer. It’s still very early for 2017 prospects, though.

ADDED TO THE BOARD: 2015
Indianapolis (IN) Ben Davis linebacker Asmar Bilal was offered by Michigan. Bilal is a 6’3″, 201-pounder with offers from Illinois, Indiana, Iowa, Michigan State, Minnesota, Nebraska, Northwestern, Notre Dame, Virginia Tech, and Wiscinson, among others. He’s a 247 Composite 4-star, the #7 inside linebacker, and #224 overall. He picked up the Michigan and Notre Dame offers at the end of last week, and those two appear to be the front-runners right now, with Notre Dame perhaps holding a slight edge. Bilal visited Michigan back in late February. Despite his ranking as an inside linebacker, Bilal is a lanky prospect with some explosiveness in the mold of a Chase Winovich and other players Michigan has pursued for the SAM linebacker position in recent years.

Indianapolis (IN) Lawrence Central linebacker Darrin Kirkland, Jr. was offered by Michigan. Kirkland is a 6’2″, 228 lb. prospect with offers from Illinois, Indiana, Kentucky, Louisville, Maryland, Mississippi State, North Carolina, Ole Miss, Penn State, Purdue, Tennessee, Virginia Tech, and Wisconsin, among others. He’s a 247 Composite 4-star, the #6 inside linebacker, and #201 overall. Kirkland had 110 tackles and 8 sacks as a junior in 2013. He’s definitely an inside linebacker prospect who probably looks the part of a middle linebacker more than anyone since Kenny Demens. Kirkland is a vicious hitter with pretty good instincts, but lacking in elite speed. Both linebacker offers probably have something to do with last week’s commitment by Merrillville (IN) Andrean linebacker Josh Barajas to Penn State. Barajas was offered by Michigan as a MIKE, and the Wolverines were in a good position with him, so this is an “EA Sports NCAA Football” moment – the #1 guy in Indiana commits elsewhere, so Michigan extends offers to #2 and then #3.

ADDED TO THE BOARD: 2016
Hartland (WI) Arrowhead offensive tackle Ben Bredeson was offered by Michigan. Bredeson is a 6’5″, 270 lb. prospect with offers from Iowa State, Tennessee, and Wisconsin. He will likely be one of the top few players in Wisconsin for 2016, perhaps the best. Bredeson is a mauler, and while he may not have the height/length to play tackle over the long run, he could also be effective as a guard. He was offered when he visited for the spring game this past weekend, but the Badgers are the presumed leader here.

OFF THE BOARD
McKinney (TX) North running back Ronald Jones II committed to Oklahoma State. Jones had not visited Michigan and was a long shot, so it’s not much of a surprise that he didn’t pick the Wolverines. However, it seemed at one time that Baylor was the likely destination, and 247’s Crystal Ball had him at 46% for Baylor,  46% for Oklahoma, and 8% for Notre Dame.

Southfield (MI) Southfield defensive end Malik McDowell finally signed his National Letter of Intent to attend Michigan State. He committed to MSU on National Signing Day, but most of us know the story: his mother disapproved of the choice because of a bad experience, so she wouldn’t sign the paper. She finally capitulated on the last day possible, which was April 1. There had been persistent rumors that Michigan might be a compromise choice between Malik and his parents, but that is obviously no longer a possibility.

MISCELLANEOUS
Here’s a list of visitors from last week and from Saturday’s spring game.

I released my final TTB Ratings for the class of 2014.

I also posted my initial TTB Ratings for the class of 2015.

Tampa (FL) Plant offensive tackle Jake Fruhmorgen will announce his college decision at 3:15 p.m. on Thursday. He visited Michigan two weekends ago, but he is likely to pick Clemson.