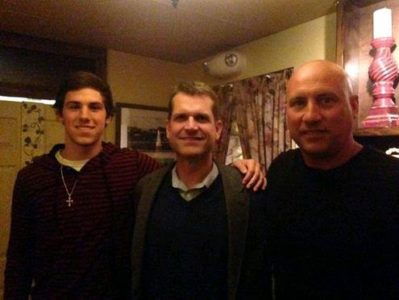 Thanks to those of you who have donated via Paypal (on the left sidebar) or who have purchased items on Amazon (LINK) to help me raise funds for a professionally redesigned site. We’ve raised over $1,000 so far, which is awesome!
—————

Avon (IN) Avon quarterback Brandon Peters committed to Michigan on Friday evening. He chose the Wolverines over offers from Arkansas, Indiana, Iowa, LSU, Nebraska, Virginia Tech, and Wisconsin, among others.

Hit the jump for more on Peters and his commitment to Michigan.

Peters was offered by Michigan a few weeks after Jim Harbaugh was hired. Immediately, many recruiting followers pegged him to commit to Michigan. When he scheduled his first visit to campus for the spring game (complete visitor list), many thought that would be the weekend. However, in the days leading up to his visit, he told Rivals that he would not be committing to Michigan at the spring game and would wait until after some upcoming visits to the likes of LSU and Nebraska. He arrived in Ann Arbor on Friday and was committed to the Wolverines by Friday night.

I wrote a scouting report on Michigan’s offered quarterbacks back in February (LINK). While you can see that I did not have Peters high on my list, it’s also a list of elite quarterbacks – several 5-stars and other high 4-stars. Even before he committed to Michigan, I started to warm up to him a little bit. Not only have I come to appreciate his pocket presence, but I also think he’s a good physical match for what Jim Harbaugh wants in a quarterback. Based on his physical skills, I would move him up to #6 on that list, ahead of Messiah DeWeaver.

When Peters arrives in 2016, he will have to fight his way up the depth chart. If there are no departures, he will be behind senior Shane Morris, redshirt junior John O’Korn, redshirt sophomore Wilton Speight, sophomore Zach Gentry, and sophomore Alex Malzone. It’s unclear right now what that depth chart might look like going into the season, but there will at least be several more experienced guys in Peters’s way. Physically, he is a better athlete than O’Korn, Speight, or Malzone, but they could still have an edge. Peters is probably looking at a redshirt and a season or two on the bench before getting a real shot at the starting gig.

The good thing for Peters – and the rest of the quarterbacks – is that Jim Harbaugh is the coach. Harbaugh took some mediocre recruits at Stanford and made them pretty good, took Andrew Luck and made him great, and took a couple mediocre NFL guys (Alex Smith, Colin Kaepernick) to great heights in the NFL. In fact, Luck and Peters share similar body types, physical skills, etc. If you look back at Luck’s high school highlights, you’ll see a lot of the same traits as you see in Peters, although Luck did it at against better competition in Texas than Peters plays against in Indiana. Luck had a stronger arm, but Peters shows better pocket awareness. This is not to say that Peters will be the next Andrew Luck, because Luck is an elite NFL quarterback with a great football mind, but there is a great deal of potential with the coaching he will get.

Peters is the third commit in the 2016 class, joining offensive tackle Erik Swenson and linebacker Dele’ Harding. He will probably be the only quarterback unless there are other departures at the position or if the class size swells dramatically. Michigan does not often push hard for a lot of players in Indiana, and the last commit from the state was from offensive guard Dan Samuelson in the 2013 class. The last time Michigan recruited Avon High School was when they went after defensive end Elijah Daniel (Auburn) in 2013. Despite it being a pretty strong program, Peters will be Michigan’s first player from the school.