In an attempt to whittle down the Ex-Wolverine Encyclopedia at the top of the page, I’m going to split up the 8,000 words there into several individual posts. The Ex-Wolverine Encyclopedia will still remain at the top of the page, but it will be limited to active collegians and then have links to each of these posts of older players or classes that have matriculated out of football.

Justin Boren – Offensive guard – Pickerington (OH) North
Boren was the son of ex-Michigan linebacker Mike Boren.  He was born and bred to be a Wolverine.  Freshman offensive linemen are almost guaranteed to redshirt, but he played as a freshman, even starting when guard Rueben Riley was injured.  Boren was a solid starter for Michigan in 2007.  But when Lloyd Carr departed after the 2007 season and Rich Rodriguez was hired, Justin and his family butted heads with the new regime.  Some stories have suggested that Boren couldn’t handle the physical requirements of the new strength and conditioning staff.  The story I believe to be true is that Lloyd Carr had promised to offer the Borens’ younger son, Zach, a scholarship.  However, Zach was a fullback and Rich Rodriguez doesn’t offer scholarships to fullbacks – he fills that position from walk-ons.  That perturbed the Borens enough to send Justin to Ohio State, the school that Zach would also attend.  Justin sat out the 2008 season and started at left guard for OSU in 2009.  Boren was named All-Big Ten in 2010 for Ohio State. He went undrafted in 2011, but spent time on the practice squads of the Baltimore Ravens, Detroit Lions, and Denver Broncos.
Current status: Out of football

Hit the jump for the rest of the players who left Michigan from the class of 2006.

END_OF_DOCUMENT_TOKEN_TO_BE_REPLACED 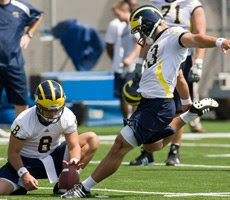 Wright is a scholarship kicker who has suffered recently from a back injury. It was thought that he might take a medical scholarship and end his football career, but he’s still kicking for the team. At this point, Wright is battling a couple other kickers for playing time, but it looks as if he’ll be on the outside looking in.