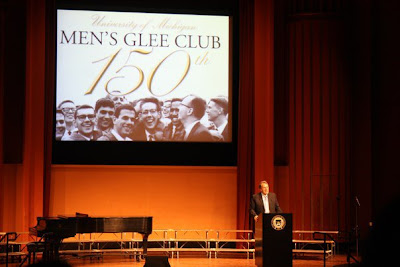 One of the reasons I haven’t been posting much is that I’ve been preparing to take a couple trips, including one to Michigan for this past weekend. The event was the University of Michigan Men’s Glee Club’s 150th reunion, a gathering for the university’s oldest student organization. Yep, I was in the Glee Club in college.

This is my second close encounter with Coach Carr. The first came when I was walking down State Street as an undergrad. He walked out of Starbucks at the corner of Liberty and State ahead of me. I followed him as inconspicuously as I could, but the only way I would have caught him would have been if I were incontinent and searching for a bathroom. I always walk faster in those situations. Anyway, he ducked into Nickel’s Arcade and I can only imagine he was crouched around the corner waiting to clothesline his stalker. Afraid of the impending whiplash, I crossed the street and headed across the Diag.

On Friday night, Coach Carr spoke for about fifteen minutes. Approximately 800 people had arrived at Rackham Auditorium to hear him speak. Part of his speech was about his connections to the Glee Club, but much of it – as one might expect – was about football.

Coach Carr told a story about former UMMGC director Willis Patterson, who directed the group from 1969 to 1975. When Carr was head coach, he invited Patterson to teach his players how to sing “The Victors,” Michigan’s fight song. After ten years of teaching the team the song, Patterson once said to Carr, “You know, those players just aren’t very good at singing that song.”
Carr responded, “Well, who’s teaching them?”

According to Carr, each year Patterson would arrive with a play drawn up that he thought Carr should run. When relating the story, Coach Carr said, “And as little as I know about singing beautifully, Willis knows even less about football.”

After the jokes ended – and there were plenty of them – Coach Carr settled into speaking about football. He spoke extensively about surrounding himself and hiring people who were passionate about football. He said that was the most important thing he looked for when hiring and recruiting. While he spoke extensively about being passionate, I couldn’t help but think about all the criticism he’s taken over the last few years for the “demise” of the football program. He’s been accused of “losing his fire” for the game and been blamed for recruiting players who couldn’t handle Rich Rodriguez’s tough new regime.

I have no idea whether Coach Carr lost his competitive edge. Just because he spoke about “passion” doesn’t mean he was passionate in the last few years of his career. But what I’ve always admired about him was the way he acted in public and supported his players. He acted with class. He refused to campaign for a shot at a national championship in 2007. Outside of his office in Schembechler Hall, he had a table with a dictionary and a stack of note cards; anytime a player wanted to speak with him, they had to find a new word and write the definition on the note card. This is a man who was interested in developing young men and setting an example, not just churning out good football players.

Even before I saw him speak, Coach Carr was a man for whom I would run through a brick wall. That feeling was only strengthened by seeing him speak Friday evening.

At the end of the evening, the UMMGC’s accompanist hopped on the piano bench and started playing “Varsity” and “The Victors.” The Glee Club’s current conductor, Dr. Paul Rardin, directed 430+ Glee Club alumni in a powerful rendition. Toward the end of the song, Dr. Rardin stepped down into the crowd and pulled Coach Carr onto the Rackham Auditorium stage. The evening ended with everyone in attendance, including Coach Carr, pumping their fists in the air and singing “Hail, hail, to Michigan, the champions of the west!”

It was a great evening.