Brady Hoke’s firing was publicly announced on December 2, so it has been 17 days since Michigan has had a head coach. Obviously, athletic director Jim Hackett is waiting on Jim Harbaugh, who declined comment about the Michigan job when asked on Thursday afternoon. News leaked – from one side or the other – that Harbaugh had been offered a 6-year, $48 million contract but Bruce Feldman says that figure is inaccurate (LINK).

Rumors persist that Oklahoma head coach Bob Stoops would be Michigan’s #2 option, but he might be off the table because someone of his coaching stature would not want to play second fiddle to Harbaugh. I say there’s no shame in being the backup to an NFL head coach who would potentially be coming back to his alma mater. That’s not an insult to Stoops, but hey, the guy has won more championships than Harbaugh.

LSU head coach Les Miles told reporters off the record that he would not be coming to Michigan.

A lot of people have been saying that Mississippi State head coach Dan Mullen is not even being considered, but he has yet to sign a rumored contract extension with MSU. He may not be on Michigan’s radar, but he seems like a guy who might be waiting for some dominoes to fall in the coaching world before he marries himself to the Bulldogs for too long (or for too big of a buyout).

With Pitt head coach Paul Chryst taking the job at Wisconsin, the Panthers are now looking for a head coach. While they probably wouldn’t be able to poach an established head coach, they may be able to snag an up-and-coming coordinator or head coach. Western Michigan head coach P.J. Fleck just signed a contract extension through 2020, but there are still guys like Greg Schiano, Tom Bradley (former Penn State defensive coordinator, current WVU assistant head coach) and Pat Narduzzi hanging around. I could see Schiano or Bradley taking the job, but Narduzzi seems to be holding out for something better than Pitt since he rebuffed UConn last year. 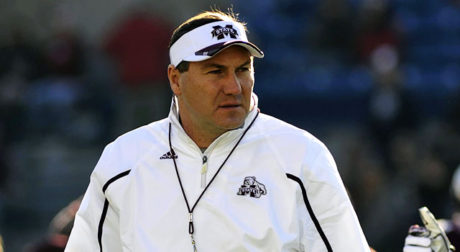 Dan Mullen
Age: 42
Current position: Mississippi State head coach
Head coaching experience: 46-30 at Mississippi State (2009-present)
History: Mullen was born in Pennsylvania, attended high school in New Hampshire, and played tight end at Ursinus College, a D-III school in Pennsylvania. He was Urban Meyer’s right-hand man as quarterbacks coach at Bowling Green, Utah, and Florida, serving as offensive coordinator at the latter. His charges have included Josh Harris at BGSU, Alex Smith at Utah, and both Chris Leak and Tim Tebow at Florida. Mullen now works with Dak Prescott, who was a 3-star and the #17 dual-threat quarterback coming out of high school and was a Heisman candidate for much of the season. Mississippi State is 10-2 this season, but Mullen has never lost fewer than 4 games in any year until now.
My thoughts: Mullen is a bit of a flash in the pan this year because of his team’s record; the 10-2 record looks nice right now, and he was undefeated through 9 games this year, but he’s consistently won between 7 and 9 games. He is in a bit of an unfair position at Mississippi State, however. He has to fight with Ole Miss inside the state, not to mention other big-time SEC programs that have been producing high-level NFL talent for several years (Florida, LSU, Alabama, etc.). Unfortunately for Mississippi State, they’re not a long-term destination and it would behoove Mullen to jump while the team is cresting, rather than waiting for a fall-off. With his roots in Pennsylvania and the northeast, he would probably do a solid job of recruiting in Big Ten country. .
Likelihood of coming to Michigan: Mullen has largely been devoid of scandal talk during his time at Mississippi State, until a couple weeks ago when he took away a scholarship offer from Chason Virgil and offered him a grayshirt opportunity instead. That ruffled some feathers, but Mullen is unable to comment publicly on the reason for pulling the scholarship (Virgil is now committed to SMU). That will be a small hurdle for Mullen to leap over if he gets hired elsewhere. Otherwise, he would seem to be a good fit. The Bulldogs have been consistent with running the ball, which Michigan fans would love. As I mentioned above, the time is now for him. If I were Michigan’s administration, he would be very high on my list.