Running back Justice Hayes, from Grand Blanc, MI, committed to the Wolverines on Monday night.  Hayes is a 5’10”, 182 lb. running back/slot receiver who’s a 4-star recruit to all three recruiting services.  Rivals is the biggest fan of Hayes, giving him the #84 ranking overall and placing him as the #3 all-purpose back in the nation.  Those are pretty high accolades.

Up until a couple days ago, Hayes was a Notre Dame commitment.  He committed to the Fighting Irish in July 2010 and seemed solidly in their corner.  However, after attending a recent game in South Bend, he stated that there were a “couple situations” in South Bend that made him uncomfortable.  It didn’t take him long to call his recruiter at Michigan, running backs coach Fred Jackson, and make a commitment to the Wolverines.

As for Hayes’s high school production, he injured his wrist three games into his senior season and missed the majority of his final year due to that injury.  However, he had solid seasons as a sophomore and junior.  As a tenth grader in 2008, Hayes carried the ball 163 times for 1,122 yards and 10 touchdowns.  He followed that up with 175 carries for 1,295 yards and 12 touchdowns.  Hayes also caught 41 passes for 447 yards over those two seasons.

According to GoBlueWolverine.com, Hayes committed to Michigan as an “athlete.”  This does not surprise me.  Michigan has a similar (but better) back already in the fold for the Class of 2011, Demetrius Hart.  Hayes catches the ball out of the backfield well, and he runs with kind of a slashing, herky jerky motion.  He has a variety of moves and looks nearly impossible to tackle one-on-one.  In some ways, he reminds me of a taller Jeremy Gallon.

What Hayes lacks is ideal size and top-end speed.  He doesn’t exactly run away from defenses, and while he runs through some tackles by picking up his feet and keeping them moving, he won’t run over anybody.  When I ranked uncommitted backs in June, Hayes checked in at #5 on my list (Dee Hart was #2).

I think the position in which Hayes would be most effective is slot receiver.  Hart is a more dynamic runner and has better speed, so I’d like Hart to get more touches from the backfield.  However, as I said above, Hayes is spectacular in open space.  I would like to see him catching some bubble screens and getting to the edge one-on-one.  That would also give the team the slot receiver they desired in the 2011 class, as evidenced by the offers to Prince Holloway, DeVondrick Nealy, and Shane Wynn, among others.

Hayes is commitment #13 in the Class of 2011.  Barring any early departures or transfers, there should be approximately nine spots left in the class.

The Effect of the Troy Woolfolk Injury on Recruiting 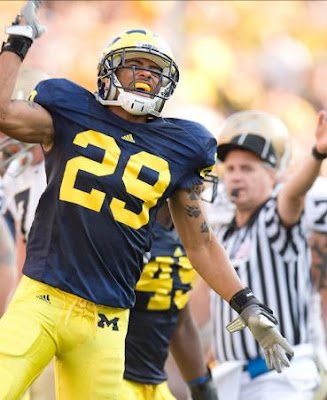 There was immediate frustration felt by Michigan fans upon Troy Woolfolk’s ankle injury, and that injury will have a ripple effect on the team and Michigan’s recruiting. As a true senior in 2010, Woolfolk’s eligibility status throws an interesting wrench into the plans to recruit for 2011.

Woolfolk’s senior status had Michigan fans and recruiting gurus planning to “take him off the books” for 2011, who assumed that his scholarship could be used toward bringing in a new recruit. I presume that Woolfolk will now return for a fifth year of eligibility in 2011. As a solid Big Ten starter with NFL measurables, Woolfolk had a chance to be a mid-round pick in the NFL Draft next year. Assuming that he recovers fully from his injury, that potential still remains but will likely be postponed until the 2012 NFL Draft.

According to my unofficial calculations, Michigan would have had 17 scholarships to give in the Class of 2011. Twelve seniors should be graduating, and five scholarships are unused. Ten of those scholarships have been filled up to this point. However, since Woolfolk will probably return for a fifth season, that number of graduating seniors drops to 11 and the total scholarships available drops to 16. And despite the fact that Michigan’s cornerback depth is very thin, Michigan should return at least three cornerbacks with starting experience in 2011 – the presumed 2010 starters in J.T. Floyd and Cullen Christian; and Woolfolk. And although it wasn’t completely necessary for Michigan to bring in an immediate-impact corner in the Class of 2011, now that need has likely been diminished even further.

Michigan already has two cornerbacks committed for 2011. The goal for a number of defensive backs may have swelled to four by Signing Day, but if Woolfolk returns, the need for a fourth DB disappears. There are now six scholarships available, and Michigan can only afford to use a maximum of one of those remaining scholarships for the defensive backfield. Here’s how I see those scholarships being used:

1. Running back: Demetrius Hart is the most likely option, as long as Michigan’s season goes fairly well.
2. Tight end: There are no impending commitments, but a WR/TE tweener could be offered and commit, such as Ben McCord.
3. Wide receiver: More depth is needed at wide receiver, especially with Darryl Stonum, Junior Hemingway, and Martavious Odoms being seniors in 2011. AJ Jordan is a possibility.
4 and 5. Offensive line: Anthony Zettel offers some position flexibility, which would be helpful with needs at both OL and DL. Chris Bryant would also be an option.
6. Defensive tackle: There’s talent already at defensive tackle, but not a lot of bodies. Michigan needs one big body in the middle.

Cornerback isn’t as pressing of a need as those other positions. Including Woolfolk and the two current Class of 2011 needs, Michigan will have seven cornerbacks on the roster in 2011. As mentioned, at least three of them will have starting experience. The needs at TE, WR, OL, and DT are more pressing. Interestingly, the position Michigan least needs to recruit is the running back spot, but Demetrius Hart is the highest-rated and most anticipated Michigan target at this point. If no additional scholarships open up and Hart commits elsewhere, I would not be surprised to see Michigan go without a running back in this recruiting cycle.

Addendum: If 2010 commitments Conelius Jones and Antonio Kinard end up qualifying and enroll in January, that could add more twists to the scholarship situation. However, usually it seems that Michigan’s non-qualifiers don’t end up at Michigan, so I’m not counting on them being a part of the picture. 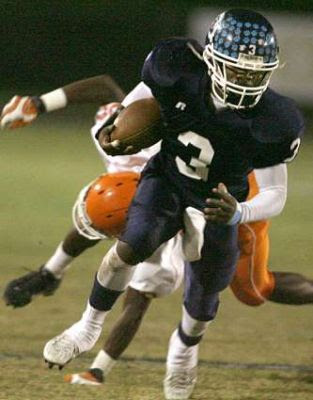 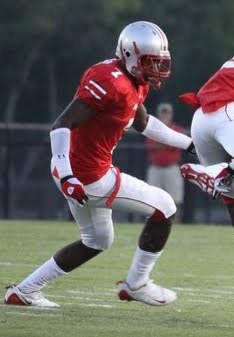 South Carolina defensive end Jadeveon Clowney
Rivals released its initial top 100 rankings today at 1:00 p.m. A cadre of Michigan targets litter the Rivals100, making it a very interesting list. To the best of my knowledge, these are the 42 players who have been offered by Michigan:

Michigan has a fighting chance with many of these players, but running back Demetrius Hart and offensive guard/defensive end Anthony Zettel are the only two that seem to have Michigan as their clear front-runner. If Michigan starts winning more, maybe their chances with more of these players will increase. Regardless, it’s somewhat nice to see that Michigan’s early offers align themselves with analysts’ ratings, too. 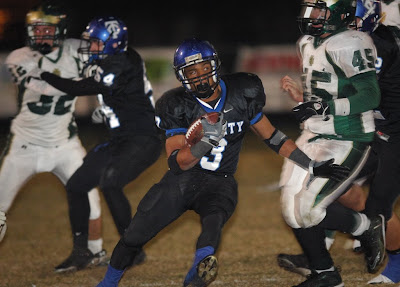