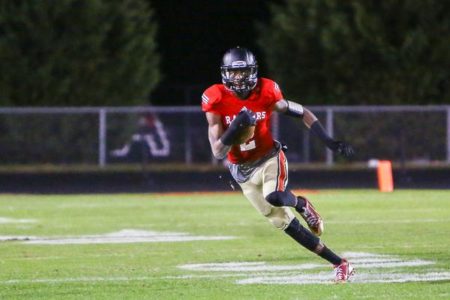 COMMITMENT?
Gardena (CA) Junipero Serra wide receiver Deontay Burnett may or may not have committed to Michigan (LINK). It sounds like he wanted to (or wants to) but either his coach or Rivals reporter Adam Gorney fouled something up.

ADDED TO THE BOARD: 2015
Grayslake (IL) North running back Titus Booker, a Wisconsin commit, was offered by Michigan. Booker is a 5’11”, 172 lb. kid with a reported 4.41 forty time who committed to Wisconsin as a cornerback. He’s ranked as a 247 Composite 3-star, the #50 running back, and #673 overall. Booker immediately scheduled an official visit to Ann Arbor, but he pulled back on that almost as immediately and said he was solid to the Badgers. Michigan wanted him as a running back.

Shreveport (LA) Calvary Baptist running back Orlando Bradford, an Arizona commit, was offered by Michigan. Bradford is a 5’9″, 195 lb. back who’s a 247 Composite 3-star, the #73 running back, and #997 overall. He immediately tweeted out that he appreciated the offer from Michigan, but that he was fully committed to the Wildcats.

Hit the jump for several more offers and tidbits.

Port Arthur (TX) Memorial running back Corey Dauphine, a Texas Tech commit, was offered by Michigan. Dauphine is a 6’0″, 185 lb. prospect with a 4.5 forty who’s ranked as a 247 Composite 4-star, the #18 running back, and #211 overall. Much like Bradford, Dauphine expressed thanks for the offer but said he was solid to the Red Raiders.

Sarasota (FL) Riverview running back Karan Higdon, an Iowa commit, was offered by Michigan. Higdon is a 5’10”, 190 lb. prospect who’s a 247 Composite 3-star, the #40 running back, and #477 overall. He got the offer on Saturday morning, said he was solid to Iowa, and then scheduled a flight to Michigan for Saturday afternoon. Higdon runs hard and has good vision, but he’s not a breakaway back. However, the Wolverines need a backup plan for Michael Weber – if not a second back, period – so the coaching staff needs to look at a lot of options.

Brentwood (TN) Ravenwood wide receiver Van Jefferson, an Ole Miss commit, was offered by Michigan. Jefferson is a 6’2″, 183 lb. prospect who claims a 4.56 forty. He’s a 247 Composite 4-star, the #11 wide receiver, #108 overall, and a U.S. Army All-American. Jefferson is the son of former NFL receiver Shawn Jefferson, who then became a coach for the Detroit Lions. Because of that, Van attended Orchard Lake (MI) St. Mary’s for his first couple years of high school before moving to Tennessee, where his dad is now the Tennessee Titans wide receivers coach. Immediately upon receiving the offer, an official visit was scheduled for this past weekend. Van was previously committed to Georgia before flipping to Ole Miss, so a pledge to Michigan would be the third during his recruiting process.

Boutte (LA) Hahnville wide receiver Brandon Singleton, a Cal commit, was offered by Michigan. Singleton is a 6’0″, 170 lb. prospect who’s a 247 Composite 3-star, the #107 wide receiver, and #860 overall. He also has offers from Arkansas, Georgia Tech, and Minnesota. He just committed to Cal on January 26th, so it would be a quick flip and Singleton has not visited Ann Arbor.

MISCELLANEOUS
I posted my predictions for all of Michigan’s uncommitted offerees (LINK).

Here’s a list of this past weekend’s official visitors (LINK).

I updated several profiles of 2015 recruits within the state of Michigan (LINK).

Gardena (CA) Junipero Serra wide receiver Deontay Burnett committed to Michigan on Sunday. He had been committed to Washington State until that point, and he also had offers from Arizona State, Miami, and Utah, among others. UPDATE: Burnett denies that he committed to Michigan, and it’s unclear whether he’s denying it because someone jumped the gun or because he truly has not committed.

Burnett was a Washington State commit since July of 2014, but an offer last week came from the Wolverines, and he set the official visit to Michigan. Once on campus, he realized that it was an opportunity he couldn’t pass up. Despite possibly playing for a pass-happy offense at Washington State, the visibility of playing at Michigan is difficult to match.

Immediately when I saw Burnett’s film last week, I thought he could be a solid pickup at this juncture. Burnett has decent speed, but his most impressive quality is the ability to go get the ball, whether it’s high or low. He consistently outjumps defensive backs and has a knack for using his hands to come down with the ball. He runs pretty good – not great – routes and seems to understand coverages, locations of defenders, etc. Burnett has a little bit of wiggle to him, although probably not enough burst to be a consistent gamebreaker.

Obviously, he is very light and needs to add weight. He’ll have to be able to block well to get onto the field, so that may be a year or two away. I also think Burnett could run crisper routes, and some added muscle might help him with his acceleration and speed. As for his lack of outstanding production, he actually led the team in receiving – despite the presence of Stanley, who also plays defense – and Junipero Serra runs the ball pretty well. Their dual-threat quarterback (2016 four-star Khalil Tate) rushed for almost 1,300 yards, three other players rushed for more than 400 yards, and eight players had more than 100 yards receiving on the season, which means they spread the ball out quite a bit.

Overall, Burnett has a little bit of a Drew Dileo vibe to me. He’s not a true burner who can take the top off a defense regularly, but he has enough quickness to surprise someone once in a while. He’s also the type of guy who can catch the ball underneath and wriggle his way into a first down. With Michigan’s current recruiting situation, they might not be able to find a true gamebreaker, but this is a solid choice so late in the game.

Burnett’s high school produces a lot of high-quality talent. In the 2015 class alone, they have two Rivals 5-stars in linebacker John Houston and defensive end Rasheem Green. They also have a 4-star, Stanley Norman, who was an Army All-American and is headed to Arizona State. Last year Serra produced two guys Michigan was recruiting hard, wide receiver/cornerback Adoree Jackson (USC) and Dwight Williams (UCLA). And for the 2016 class, they already have three 4-stars and two 3-stars ranked by Rivals. If Michigan can get and keep their foot in the door, this could turn into a productive relationship with the school.