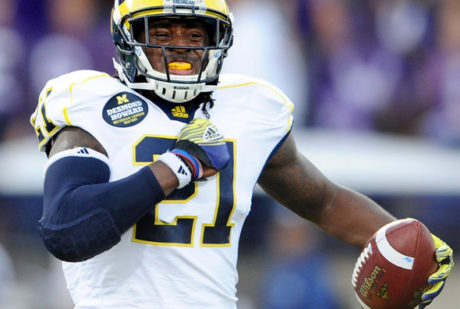 Michigan’s Legends jerseys are unique to the University of Michigan and are awarded each season to players deemed deserving by the coaching staff. The plan is to hand out each jersey number every year, and so far, no freshman has been honored with wearing the jersey. That means that each player listed below has changed his jersey number mid-career, with the exception of Junior Hemingway, who wore #21 prior to the Legends jersey idea but was bedazzled with a Desmond Howard patch during the 2011 season.

Feel free to discuss who will wear #11 and #21 this year. The other jersey numbers are taken by returning players, although someone like Devin Funchess could be given the #1 jersey, which would open up his current #87. 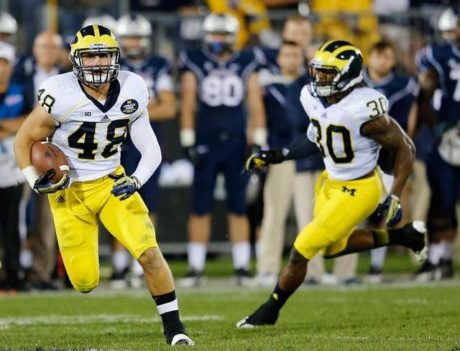 I expected a little more consistent play out of Morgan in 2013, who has been starting since his true freshman year. While he essentially reached the statistical level that I predicted, he did not seem to take a big step forward in play diagnosis. I thought he would really settle in at MIKE linebacker after playing out of position as a WILL for the previous couple years; however, Michigan struggled to stop the run consistently, and some small and/or underperforming defensive tackles didn’t help the linebackers much. Regardless, Morgan did have a solid year, and his leaping, one-handed interception against UConn was a game-changer.

Even though he’s one of only a few seniors in 2014, I’m dropping Morgan nine spots to #22 on this list. The new 4-3 Over defense has bumped Morgan back to WILL, and he’s now receiving a challenge from junior up-and-comer Joe Bolden, who impressed people in the spring after a 54-tackle, 2-sack sophomore year. Coaches need to balance team chemistry, leadership, and talent, so it would be difficult to bench a senior, three-year starter with a Gerald Ford Legends jersey. At the same time, Brady Hoke and company need to win games. Aside from the battle for strong safety, the weakside linebacker position battle looks like the most interesting job competition going into the fall. Whichever player wins the gig should do fairly well, and the backup will get plenty of time in the linebacker rotation, anyway. My guess is that Morgan wins out by a nose for the starting job. 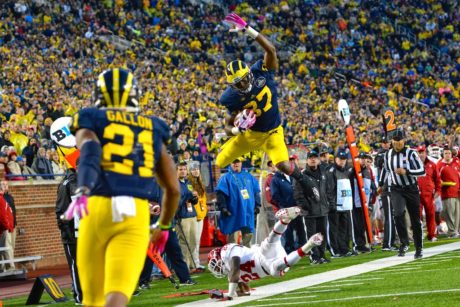 Phil Steele released his 2014 All-Big Ten team, and there are several Michigan players on the list.

Many of these are interesting picks for various reasons. First of all, Devin Funchess is going into his first year as a full-time wideout, and he will also be without a proven commodity taking attention away from him in the form of Jeremy Gallon. Ryan is switching positions from strongside outside linebacker to middle linebacker in a new base defense. Countess has been rumored to be relegated to a backup role behind sophomore Jourdan Lewis, though Countess will start at slot corner. Morgan is another guy who changes positions, albeit slightly (middle linebacker to weakside linebacker). Gardner might be the most physically talented quarterback in the conference, but he’s behind Braxton Miller (understandable due to winning and good talent), Connor Cook (who came out of nowhere last year), and Christian Hackenberg (who will be without his stud receiver, Allen Robinson). I think there’s a decent chance that Gardner is a First Team or Second Team all-conference quarterback by year’s end. Meanwhile, Ross is in a battle for his position with up-and-comer Royce Jenkins-Stone.

Michigan certainly has a lot of question marks going into 2014, but that’s what happens when you go 8-5 and 7-6 in consecutive years. 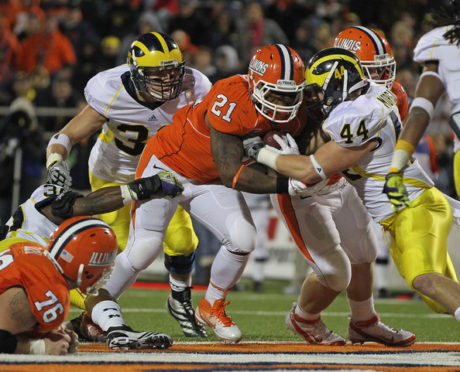 There have been a couple major position changes and a couple minor ones during the offseason. In an attempt to allay some people’s fears, here are my thoughts on how things are developing.

Ross Douglas from CB to RB. Michigan failed to nab a running back in the 2014 class, largely for a lack of trying. There were some candidates out there that the Wolverines simply chose not to pursue, and then rising senior Thomas Rawls chose to transfer to Central Michigan. Michigan needed to add some depth at running back, and Douglas was a pretty good one in high school. I do not think Douglas is in danger of turning into a feature back anytime soon, but he may provide some change-of-pace skills for Michigan’s Thunder Squared combination of Derrick Green and De’Veon Smith. Douglas played some running back on the scout team last year, and I think this switch is likely to stick, at least until Michigan has a chance to bring in more running backs in 2015 or 2016. He could also be a guy who bounces back and forth from offense to defense.

Wyatt Shallman from RB to H-back. I have long believed that Shallman would not make much of an impact on the running back position, except perhaps as a short yardage guy. I think the need for a short yardage back is relatively non-existent with Green and Smith on the team. Additionally, new offensive coordinator Doug Nussmeier seems like a guy who’s going to run a lot of single back sets and a lot of spread formations, meaning the fullback will likely be phased out for the next couple years. The 6’3″, 243 lb. Shallman could help out as a blocker and pass catcher out of the backfield, and he has the size to be a second tight end on the field like an Aaron Shea.

Keith Heitzman from DE to TE. Heitzman was the starter at strongside end to begin last season, but a hand injury combined with competition from other players bumped him down in the lineup. With other guys emerging at strongside end (Brennen Beyer, Taco Charlton, Chris Wormley), Michigan has the flexibility to put Heitzman at tight end to shore up the position after Jake Butt’s ACL injury. Butt might be back by week three, but Heitzman could be a long-term solution as a blocking tight end, since junior A.J. Williams has struggled in his first two seasons. Heitzman played tight end in high school, and while he probably won’t run away from anyone or dazzle people with his moves, he should be a quality in-line blocker and has the potential to catch a pass here or there.

Jake Ryan from SAM to MIKE. Royce Jenkins-Stone from MIKE to SAM. James Ross from WILL to SAM. Desmond Morgan from MIKE to WILL. Did I catch all the moves? I think so. A couple of the younger inside linebackers are staying inside, so I won’t bother analyzing that. The new starting lineup will look a lot like the old starting lineup, except Morgan will be on the weak side, Ryan will be in the middle, and Ross will be on the strong side. Head coach Brady Hoke announced that Michigan would be running more Over looks in 2014, which means that the protected linebacker (formerly WILL James Ross) will now be middle linebacker Jake Ryan. This also likely changes Michigan’s front seven slightly, from a “hold your gap” defense to more of a penetrating unit. Against base 12 personnel previously, Michigan had six defenders from tight end to tackle (four defensive linemen, the WILL, and the MIKE). In an Over look, the defensive front will have seven defenders inside that box (four defensive linemen and all three linebackers). This should allow Ryan to roam from sideline to sideline while keeping Ross relatively clean, and Morgan will still be the guy who has to take on lead blocks from fullbacks, which he does fairly well.