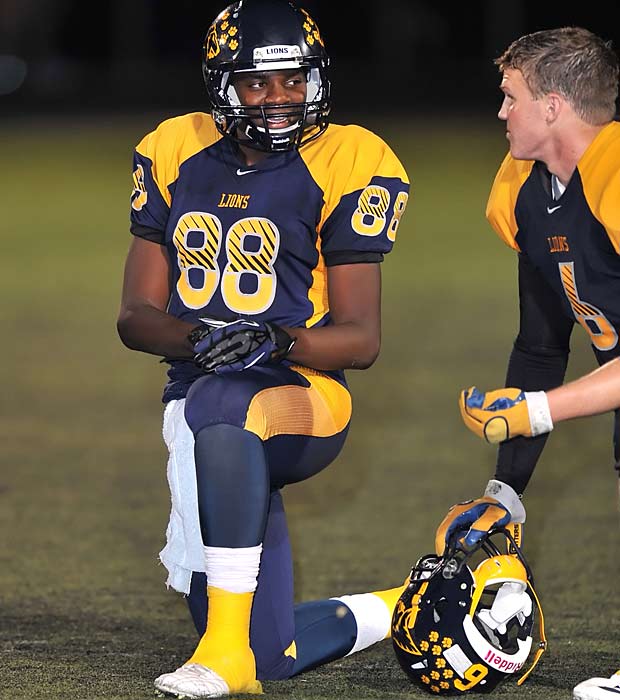 ADDED TO THE BOARD: 2016
Harbor City (CA) Narbonne wide receiver Devaughn Cooper was offered by Michigan. He’s a 5’10”, 171 lb. prospect with offers from Arizona and Washington, among others. As a junior in 2014, he caught 34 passes for 587 yards and 8 touchdowns. He claims a 4.61 forty. Cooper doesn’t have amazing physical skills, but he’s a nifty runner after the catch and isn’t afraid to catch the ball in traffic. He is a teammate of offensive tackle Alex Akingbulu, who also holds an offer from Michigan.

Tampa (FL) Catholic wide receiver Nate Craig-Myers decommitted from Auburn. He’s a 6’2″, 205 lb. prospect who’s a 247 Composite 5-star, the #1 wide receiver, and #23 overall. He never really showed interest in his Michigan offer, and Ohio State has a slim chance, but it looks like Florida State will be the beneficiary of his parting ways with Auburn.

Winchester (IN) Community safety Kiante Enis was offered by Michigan. He’s a 6’1″, 180 lb. prospect with offers from Cincinnati, Indiana, and Louisville, among others. He’s a 247 Composite 3-star, the #61 running back, and #792 overall. As a junior in 2014, he ran the ball 299 times for 3,189 yards and 49 touchdowns. He claims a 4.35 forty. Enis has good speed, although film should be taken with a grain of salt when he’s running past small-town Indiana kids for a high school that has roughly 500 kids. He’s the nephew of former Penn State running back Curtis Enis, who went on to be a first round pick of the Chicago Bears. Michigan appears to be looking at Enis as a safety, although he has some position flexibility to play running back or receiver at the next level.

Hit the jump for several more new offers, a few guys who committed elsewhere, and then some random bits.

Fort Lauderdale (FL) St. Thomas Aquinas wide receiver Michael Irvin, Jr. was offered by Michigan. He’s a 6’3″, 212 lb. prospect with offers from Georgia and Miami. He’s a 247 Composite 3-star, the #94 wide receiver, and #619 overall. Much like his father – former University of Miami and Dallas Cowboys wide receiver Michael Irvin – the younger Irvin is not known for his speed. Irvin, Jr. spent his junior season at Plano (TX) Prestonwood Christian, but he will be playing for St. Thomas Aquinas this fall, a Florida powerhouse. Michigan has unsuccessfully recruited several players from there before, although transfer quarterbacks Jake Rudock and John O’Korn are both alums. Regardless, Irvin is expected to follow in his footsteps and become a Hurricane.

Roswell (GA) Roswell linebacker Tre Lamar was offered by Michigan. He’s a 6’4″, 240 lb. prospect with offers from Alabama, Auburn, Clemson, Florida, Florida State, LSU, and Notre Dame, among others. He’s a 247 Composite 4-star, the #5 inside linebacker, and #148 overall. As a junior in 2014, he made 131 tackles, 13 tackles for loss, 4 sacks, and 7 pass breakups. Lamar is a large kid with a thick lower body, and he will probably outgrow the position and become a defensive end at some point. His teammate, 2017 cornerback LeAnthony Williams, also picked up an offer from Michigan. Lamar is expected to end up at Clemson.

Loganville (GA) Grayson defensive end Mykelle McDaniel was offered by Michigan. He’s a 6’4″, 255 lb. prospect with offers from Alabama, Clemson, Florida, Florida State, Notre Dame, and Stanford, among others. He’s a 247 Composite 3-star, the #25 strongside end, and #479 overall. McDaniel is a big body with a pretty good motor, although he does not have outstanding athleticism. His teammate, 2019 running back/linebacker Owen Pappoe, was also offered by the Wolverines.

Greensboro (NC) Page wide receiver Diondre Overton was offered by Michigan. He’s a 6’4″, 193 lb. prospect with offers from Clemson, North Carolina, North Carolina State, and Tennessee, among others. He’s a 247 Composite 4-star, the #29 wide receiver, and #160 overall. Despite being a tall guy, Overton has very good short-area quickness and run-after-the-catch abilities. His leader appears to be Clemson, which is a good destination for receivers these days.

Jacksonville (NC) Southwest defensive end Jimmie Taylor was offered by Michigan. He’s a 6’3″, 220 lb. prospect with offers from Florida, North Carolina, North Carolina State, and Tennessee, among others. He’s a 247 Composite 3-star, the #48 weakside end, and #760 overall. He looks like a kid who might outgrow the weakside end position into a strongside guy since he is solidly built, and he does not have a great speed rush.

Downey (CA) Downey athlete Daevon Vigilant was offered by Michigan. He’s a 5’7″, 180 lb. prospect with offers from Colorado, San Diego State, Utah, and Washington State, among others. He is currently unranked by the recruiting services. As a junior in 2014, he had almost 2,000 rushing yards and 300 receiving yards. It’s unclear which position Michigan wants him to play since he is rather small for a running back, but he could be a receiver, corner, or returner. One thing on Michigan’s end is clear – the Wolverines need more guys who can make plays with the ball in their hands. Teammate Darrian Franklin is a 2016 prospect who also holds a Michigan offer and likes the Wolverines.

OFF THE BOARD
Phenix City (AL) Central cornerback John Broussard committed to Auburn. He was expected to stay down south, and did not show much interest in his Michigan offer. He’s the #98 overall player in the country according to 247 Composite rankings.

Rancho Cucamonga (CA) Los Osos offensive tackle Cohl Cabral committed to Arizona State. This is a bit of a steal for the Sun Devils, since Cabral was expected to take USC up on their offer.

Plymouth (MI) Plymouth offensive tackle Michael Jordan committed to Ohio State. This was a bit of a surprise because Jordan was reportedly hoping to take his time with his recruitment. It was not so much of a surprise that he committed to Ohio State. Not only does he want to pursue a program that some other schools don’t offer, but despite growing up a Michigan fan, he always had an eye on Ohio State and was not as enthused about his Michigan offer as some in-state guys are. It’s a blow to Michigan, because he’s the #156 player overall and I had him as the #4 player in the state of Michigan (LINK).

MISCELLANEOUS
Norfolk (VA) Lake Taylor cornerback Wayne Davis named a top five that includes Michigan. He’s a 247 Composite 3-star, the #30 cornerback, and #330 overall. However, he said Ohio State and Virginia Tech are tied for the lead, and he plans to make a visit this summer, so Michigan needs to get him on campus if they want a shot.

Darien (IL) Hinsdale South defensive end Josh King named a final five that includes Michigan. The big fish on this list of kids who named top lists, King is a 247 Composite 4-star, the #6 strongside end, and #73 overall. The Wolverines are competing against Michigan State, Notre Dame, Penn State, and USC.

Here are a couple visitors from this past week (LINK).