Hit the jump for Durkin’s presser. 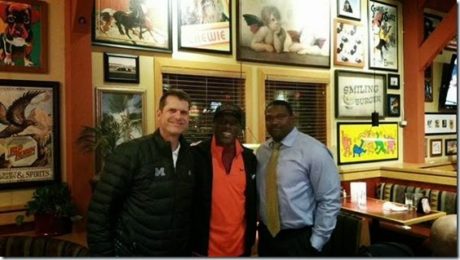 Here are some updated rumors and speculation about the open coaching positions on Michigan’s staff.

2. Tim Drevno, Offensive Coordinator/Offensive line: Drevno, the USC offensive line coach and run game coordinator, is coming to Michigan (LINK). He might be doing the whole line by himself, although he will probably get some help from a graduate assistant.
Other possibility: Andy Moeller or Todd Washington (offensive line)

3. Running backs: Former Buffalo Bills running backs coach Tyrone Wheatley flew into town last night and went to dinner with Harbaugh at Red Robin. He was supposed to interview for the running backs job yesterday, but his late arrival postponed the interview to today. No contract is done yet, but it would be quite a surprise if Wheatley didn’t get the job.
Other possibilities: Fred Jackson, Roy Manning

4. Wide receivers: Rumors appeared on New Year’s Eve that John Morton was expected to join Michigan’s staff, although there has been nothing confirmed yet. No, this isn’t the former Detroit Lions wide receiver, but San Francisco 49ers wide receiver coach Morton is out of a job. Morton grew up in Michigan and played wide receiver at Western Michigan, so he’s a midwest guy and would presumably have some connections in the area. San Francisco’s wide receivers weren’t spectacular, but he has worked with some pretty big names in Anquan Boldin and Michael Crabtree.
Other possibilities: Erik Campbell, Ronald Curry, Jeff Hecklinski

5. Tight ends: Vince Marrow decided to stay at Kentucky, and it’s been reported that Michigan has offered a job to San Jose State University offensive coordinator/quarterbacks coach Jimmie Dougherty. Dougherty worked for Harbaugh at San Diego, and he also has experience coaching wide receivers and tight ends. Since it seems like Morton will be coaching the wideouts, Dougherty might find himself coaching tight ends. He may also get a “passing game coordinator” title, pairing with Drevno.
Other possibility: Kevin Koger

7. Defensive line: Michigan defensive coordinator Greg Mattison will be a holdover from the previous staff to this one. Mattison has family in the area, loves the University of Michigan, is a pretty good coach with NFL experience, and is a great recruiter. He also has connections to Harbaugh and defensive coordinator D.J. Durkin. It’s unclear which role Mattison will have, whether it’s working with the defensive line or linebackers.
Other possibilities: D.J. Durkin, Roy Manning

8. Linebackers: Michigan cornerbacks coach Roy Manning has been heavily rumored to be staying around on staff, and it was reported that he already interviewed for a job. Whether he gets that job or not remains to be seen, but it seems to make sense that he would work with the linebackers, a position he has previously coached. The cornerback thing didn’t go so well last year, but he has been perhaps Michigan’s best recruiter.
Other possibility: Peter Hansen, Greg Mattison

9. Defensive backs: San Francisco 49ers defensive backs coach Greg Jackson reportedly contacted Louisiana defensive end Jalen Bates, a guy with a Michigan offer who committed to Arizona State. Bates’s cousin is former Michigan linebacker Jonas Mouton. Unless this is like Vince Marrow contacting Chris Clark for no reason at all, it looks like Jackson will be coaching some/all of the defensive backs. Meanwhile, Michigan safeties coach Curt Mallory has been hired at Wyoming (LINK), so he’s not going to return.
Other possibility: Roy Manning

10. Special teams: Sam Webb tweeted out that Michigan would probably be getting a guy dedicated to special teams only. That guy could very well be Florida special teams coordinator Coleman Hutzler (LINK), who worked with Durkin last year and coached outside linebackers at New Mexico for a couple seasons before that. Michigan may find themselves splitting the defense up oddly, with a couple guys combining on the DL and a couple more combining on the LB spots. Personally, I don’t believe it’s wise to have someone who’s only devoted to special teams; if that happens, the special teams had better be awesome.
Other possibility: ??? 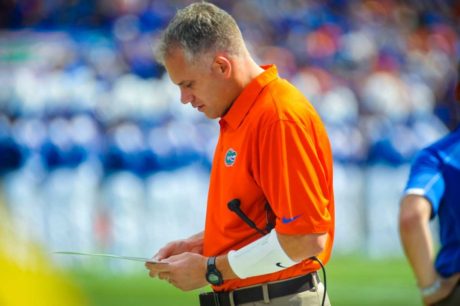 Durkin is a 36-year-old who went to high school at Boardman (OH) Boardman before becoming a two-year captain at Bowling Green State University, playing defensive end and outside linebacker. After finishing his career in 2000, he joined Urban Meyer’s staff as a graduate assistant in 2001-2002. He then spent two years at Notre Dame under Tyrone Willingham (and with Greg Mattison), working as a graduate assistant with the defensive line. His first full-time coaching gig came back at BGSU working with the defensive ends in 2005 and then the linebackers and special teams in 2006. When Jim Harbaugh was hired at Stanford in 2007, Durkin joined him as the defensive ends and special teams coach. The year before Harbaugh left, Durkin headed to Florida to be their defensive ends/special teams coach, where he again worked under Meyer (2010) and then under Will Muschamp. Last season he was promoted to defensive coordinator and became the interim head coach for the Birmingham Bowl this season, which Florida won over East Carolina, 28-20.

As a defensive coordinator, Florida has allowed 21.1 points/game each of the last two years (tied for #19 in 2014, #15 in 2013), and they have been #15 in total defense (329.8 yards/game allowed in 2014) and #8 (314.4 yards/game allowed in 2013). This past year Florida was tied for 44th in sacks (32), tied for 29th in tackles for loss (87), and tied for 15th in interceptions (16). It should be noted that he was working with renowned defensive mind Will Muschamp, but there aren’t many better mentors to have. As a defensive coach in general, Durkin has coached up Justin Tuck (Notre Dame/New York Giants), Jelani Jenkins (Florida/Miami Dolphins), and Jon Bostic (Florida/Chicago Bears).

Hit the jump for much more on Durkin’s special teams and recruiting accomplishments.

As a special teams coach, Durkin has a good history. Some accomplishments during his tenure:

Overall, when Durkin has been in charge of special teams, his squads have scored 8 kickoff return touchdowns and 7 punt return team touchdowns (including returns on blocked kicks), albeit zero in his first two years as a coordinator in 2006-2007. If we look at that same span of success (2008-2012) at Michigan, the Wolverines totaled 3 punt returns and 1 kickoff return touchdowns. So Durkin’s teams scored 15 times, while Rich Rodriguez/Brady Hoke’s teams scored 4 times. Additionally, the Cardinal and Gators blocked 22 kicks during that five-year span. If Durkin is indeed the defensive coordinator and a position coach, he will almost certainly not be the team’s primary special teams coach, but he would undoubtedly have some input.
As a recruiter, Durkin was named the Rivals Recruiter of the Year in 2012 after reeling in two 5-stars (D.J. Humphries, Jonathan Bullard) and two 4-stars (Brian Poole, Jeremi Powell). He had another successful year in 2013, pulling in four linebackers – 5-star Alex Anzalone, two 4-stars, and a 3-star. His recruiting role seems to have diminished a bit once he was promoted to defensive coordinator at Florida, but he was able to reel in two 4-stars in the 2015 class (linebackers Jerome Baker and Adonis Thomas) before the season went south for the Gators, which led them to flip to Ohio State and Alabama, respectively. Four-star Georgia defensive end/outside linebacker Roquan Smith has said that he would want to check out Michigan if Durkin were hired, and Durkin was also the point man for 5-stars CeCe Jefferson (uncommitted) and Keisean Lucier-South (committed to UCLA but with potential if Jim Mora leaves for the NFL).
Outside of pipe dream hires (Nick Saban! Marvin Lewis! Norman Schwarzkopf!), Durkin seems like one of the best hires Michigan could make. Harbaugh reportedly failed to steal Lance Anderson from Stanford, but Harbaugh/Mattison/Durkin have a history, Durkin worked with some standout coaches (Meyer, Harbaugh, Muschamp), he’s an ace recruiter who will be one state away from his hometown stomping grounds, and his special teams acumen is a plus. He’s also a young, energetic guy whom the Florida players seemed to like, and he could be an heir to the program if Harbaugh decides to go back to the NFL at some point. One knock on him is that he has yet to produce an absolutely outstanding player. Regardless, it’s better to have a good unit than one stud and a bunch of stiffs, and he has been able to do that.
Page 7 of 7« First«...34567