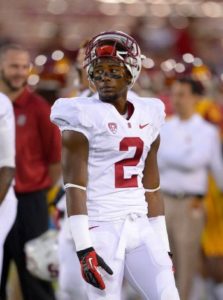 I had been holding off on this until something official came from the university, but rising fifth-year cornerback Wayne Lyons is transferring from Stanford to Michigan and will play for the Wolverines this fall. He will be immediately eligible as a graduate transfer. This had been rumored for a while, and cornerbacks coach Mike Zordich confirmed Lyons’ pending arrival in an interview on Thursday.

Hit the jump for a rundown on Lyons:

Lyons is a 6’1″, 193 lb. corner. He was originally recruited by Jim Harbaugh to Stanford, and he was also recruited by Rich Rodriguez and Michigan in the 2011 class. Coming out of Fort Lauderdale (FL) Dillard, he was a 247 Composite 4-star, the #5 safety, and #98 overall. He chose Stanford over offers from Florida, Michigan, Nebraska, Notre Dame, and UCLA, among others. He was also a U.S. Army All-American Bowl participant in 2011. Here are his senior highlights:

I also happened to write a scouting report on him back in December 2010 (LINK). It’s interesting to look back at a little over four years later. Stanford played Lyons at corner as a freshman before he broke his foot, garnering a medical redshirt for the 2011 season. He made 25 tackles and 1 interception as a redshirt freshman backup corner in 2012. As a redshirt sophomore in 2013, he made 69 tackles, 4.5 tackles for loss, 2 interceptions, 2 forced fumbles, and 2 pass breakups; his 2 interceptions came late in the fourth quarter of a win against Notre Dame (starting at 2:33 in video below). He started at corner in 2014 and made 30 tackles, 1 forced fumble, and 3 pass breakups. He has not quite lived up to his billing as a top-100 player, but he has been solid.

Michigan is pretty solid with their starting group of defensive backs right now, so bringing in a ringer to start is not absolutely necessary. As mentioned above, Lyons could play virtually any position in the defensive backfield right now. With the starters looking like cornerback Jourdan Lewis, cornerback Blake Countess, free safety Jabrill Peppers, and strong safety Jarrod Wilson, Lyons is a bit of a luxury. He can play in the slot, which is where Peppers has been rotating in nickel situations this spring. With Lyons on the roster, that might allow the Wolverines to keep Peppers at safety and bring in Lyons off the sideline. From what I’ve seen out of him so far, I think Lyons is a bit behind Lewis and Countess (at least the 2013 version of the latter) but ahead of Channing Stribling in the cornerback pecking order.

Most of all, this gives Michigan options at defensive back. Lyons can play safety if the need arises, or he can play corner if that’s where he fits best. If it were up to me, he would be the nickel corner because he’s physical enough to stop the run and blitz, and he’s good enough in coverage to handle the duties in the slot.

Lyons’s arrival was foretold by the fact that Jim Harbaugh hired his mother, Gwendolyn Bush, to be an advisor to the players at Michigan. This alleviates some of the issues from Michigan’s lack of depth at the corner position after they had two talented corners (Shaun Crawford, Garrett Taylor) decommit during the 2015 recruiting cycle. Michigan was looking for an instant-impact guy, and they signed only Keith Washington, a project from Alabama who was mostly a quarterback in high school. Obviously, Lyons is only a one-year fix and Michigan has a strong need for corners in the 2016 class with Countess and Lyons both graduating this coming year.

Michigan is now up to 85 scholarships for 2015, which means that any additions to the roster will require some attrition, putting someone on a medical scholarship, or taking away a scholarship from one of several walk-ons (Graham Glasgow, Ryan Glasgow, or Joe Kerridge). Weber State punter Blake O’Neill is supposed to join Michigan’s roster by the fall, so someone is on the “chopping block.”

The University of Michigan football program does not often receive transfers. In the past decade or so, they have been limited to: