How will the recent departures affect Michigan in 2012?

WR Darryl Stonum: Stonum was booted out of the program for yet another run-in with the law.  He had several alcohol-related offenses throughout his college career and was suspended for the entirety of the 2011 season, which would have been his senior year.  Instead, he took a “redshirt year” and everyone hoped he would mature and jump back into a starting role for 2012.  In 2010 he had 49 receptions for 633 yards and 4 touchdowns.  He probably could have approximated those numbers again in 2012 because he would have been the most proven and most physically talented wide receiver on the roster.  The Wolverines lost Junior Hemingway, Martavious Odoms, and Kelvin Grady to graduation, who combined for 46 receptions, 908 yards, and 7 touchdowns.  Now the top two wideouts going into 2012 seem to be the 5’8″ Jeremy Gallon (31 receptions, 453 yards, 3 touchdowns) and Roy Roundtree (19 receptions, 355 yards, 2 touchdowns).  The loss of Stonum will hurt Michigan significantly.

C Rocko Khoury: Khoury was considered to be in the mix for the starting center job in 2012.  He had been the top backup at the position for the past two seasons, and with David Molk’s graduation, there was an opening.  Most of the buzz this offseason indicated that Ricky Barnum was the front-runner for the position, and perhaps that was because the coaches knew for a while that Khoury would not return.  I would be interested to know why Khoury is done at Michigan.  Did he burn out?  Did he assume he would lose the battle with Khoury?  Will he continue his career elsewhere?  The answers to those questions are unclear.  It is clear, however, that the Wolverines are dangerously thin at center now.  Barnum – who has a history of getting injured –  is practically guaranteed to start at center, and the backup is redshirt freshman Jack Miller, who was listed at 263 lbs. last season.  Other options are Elliott Mealer, who has played guard and tackle in his career and taken some practice; walk-on Joey Burzynski; or one of the true freshmen, although none of them was expected to play center when recruited.  Considering Barnum’s injury history, one or more backups are practically guaranteed to play at some point.

WR Terrence Robinson: Robinson was a virtual non-factor as a wide receiver (1 reception for 43 yards in 2010), but he turned into a bit of a special teams coverage demon in 2011.  He made a total of 6 tackles, 1 forced fumble, and 1 fumble recovery on punt and kickoff coverage teams.  Some insiders believed that he even had a good shot at contributing on offense, based on comments that some of the coaches had made.  Robinson’s role can likely be filled on special teams, however, and history suggests that any offensive output would probably have been minimal.

RB Michael Cox: Cox contributed very little in Michigan’s 11-2 season last fall; the most he did was return a couple short kickoffs.  He had 19 career carries for 169 yards and 2 touchdowns, most of which came in 2009.  While Cox gave flashes that he might have been the most physically talented running back on the roster, rumors persisted that he struggled to learn the playbook and had some attitude issues.  He did play very well whenever he got a chance to show his skills, but all indications seemed to be that he would be see only limited duty again in 2012.  Of the six players listed here, Cox is the only one who has announced plans to continue his career elsewhere; he will transfer to UMass and play football for the upcoming season.

LB Isaiah Bell: Bell had been moored to the bench for the last three seasons.  He was likely destined to continue that role as a benchwarmer, and his departure should have virtually no effect on the team.

LS George Morales: Much like Bell, Morales hadn’t seen the field yet in his career.  The Wolverines have a couple long snappers already on the roster, one of whom (Jareth Glanda) won the starting short snapper job last season for field goals and extra points; there are also a couple kids entering school as part of the 2012 class who might be able to help if needed.

I guess this means Khoury won’t be winning that center position.  This makes Michigan painfully thin at center, with only fifth year senior Ricky Barnum and redshirt freshman Jack Miller the only scholarship centers on the roster.  Fifth year senior Elliott Mealer has some experience snapping the ball, but only in practice. 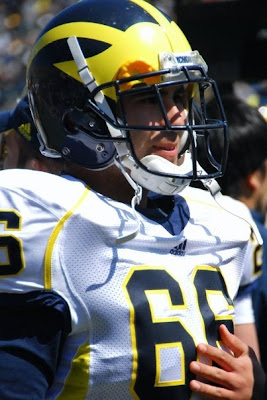 George Morales
With the departure of long-time starting long snapper Sean Griffin, Michigan needs a replacement. The person pictured above is George Morales, the only scholarship long snapper on the team.
Unfortunately for him (and that scholarship), Morales is reportedly third on the depth chart:
1. Tom Pomarico (RS Sophomore)
2. Curt Graman (Freshman)
3. George Morales (RS Freshman)
I’m not sure how the long snapping depth chart will play out, but Michigan fans have been spoiled in recent years with good play from the long snapper. Hopefully, that tradition can continue. Bad special teams snaps can often be the difference between a win and a loss. Considering that the scholarship long snapper is currently the third best at his position, I’m expecting the winner of that battle to turn out to be pretty good.